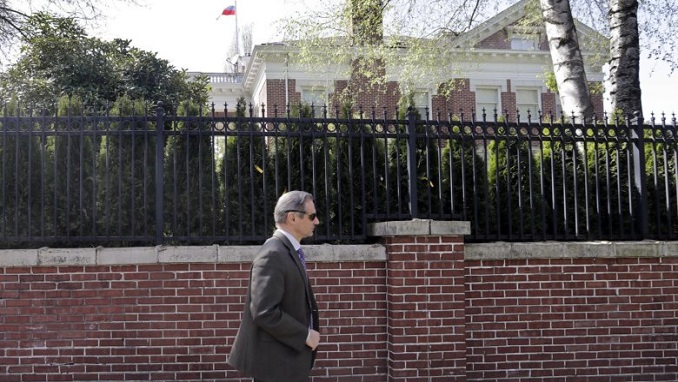 The Russian government intends to file a lawsuit against the United States, seeking recognition that the U.S. government’s decision concerning the seizure of Russian diplomatic properties was illegal, Kommersant reports.

However, it is not yet clear when the hearings will begin and which court would consider the claim. Sources in Russian state structures told a business daily newspaper that a lawsuit this complex requires “careful preparation.”

The Russian residency in Seattle has expanded the list of five diplomatic facilities that the U.S. authorities had deprived of immunity and blocked since the end of 2016.

The Russian authorities hope to return the buildings through the court and have already found a law firm that will represent their interests. Deputy Foreign Minister Sergei Ryabkov told Kommersant that Russia “will have to experiment on material that has not existed so far.”

“Moscow is” 100% sure of its own rightness,” Ryabkov added. The State Department, however, is sure of the legitimacy of U.S. actions. Sources in the Russian government recognized the chances of obtaining a review of the U.S. authorities’ decision are “minimal.”

Russia will continue to be the owner of the listed premises, the press secretary of the U.S. Embassy in Moscow Andrea Kalan confirmed.

“Buildings that are owned by the Russian side will remain so. The question of whether to sell this property or otherwise dispose of it remains at the discretion of the Russian side.” At the same time, she specified that “these facilities will not be authorized to carry out diplomatic or consular activities and will not be recognized as such.”

Experts interviewed by Kommersant gave varied assessments of Russia’s chances of winning the case against American authorities. Kal Raustiala, Professor of Law at UCLA, told the newspaper he believes that the U.S. authorities’ actions against Russia’s property could be challenged in court since international legislation provides diplomats, embassies and consulates with serious protection.

BGP Litigation associate Denis Durashkin said, “The United States did not deprive Russia of ownership of the premises, but withdrew their status and associated privileges and immunities. Russia still has the right to dispose of its property. The question of granting or depriving consular status, however, is in the exclusive purview of the United States,” he said.

AnimeHeaven The Misfit of Demon King Academy: History’s Strongest Demon King Reincarnates and Goes to School with His Descendants (Dub)