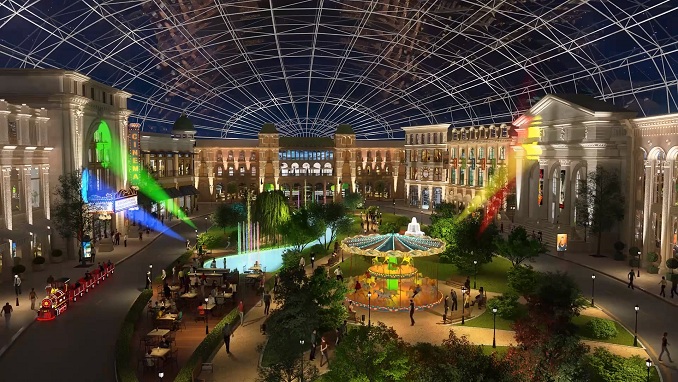 In what was a Soviet-era dream come true, a super big theme park named Dream Island, which the media are calling Russia’s answer to the world-famous Disneyland, The New York Times reports.

The large-scale indoor theme park in Moscow will be one of the biggest parks in Europe after its launch on Saturday. A few days before the opening, Russian President Vladimir Putin, along with Moscow Mayor Sergei Sobyanin, took a stroll in the park.

In the age of sanctions and strained U.S. relations, all stories, characters and attractions in Dream Island are Russian-themed.

The complex covers 30 hectares in an industrial neighborhood in southern Moscow, and is aiming to be one of the biggest and the best theme parks in the world.

Ostrov Mechty or Dream Island is a theme park that is built on the lines of a toy castle. Spread across 30 ha, the island is brimming with amusing rides and attractions. The place will also feature famous restaurants.

Russia has been dreaming of building something bigger and Dream Island is certainly the outcome. As per local municipal authorities, this would be the largest indoor theme park of its kind in the whole of the continent (Europe).

One of the prime attractions of the place would be a glass dome at the entrance, which is said to be larger than the dome at the Galeries Lafayette in Paris. The Dreams Island, which is Russia’s first and Europe’s largest indoor theme park, is built in the Nagatinskaya flood plain.

It is believed that the park would attract up to 7.5 million people per year while the park complex will have the capacity to accommodate 50 million visitors. There are 27 rides, four interactive entertainments, and five show programs inside the park that aim to entertain kids as well as adults.