The Russian tanker General Azi Aslanov hit by an explosion in the Sea of Azov was in good repair, chief of the Emergency Ministry’s directorate in the Krasnodar Region Oleg Volynkin told reporters, TASS informs.

“According to the information we obtained, the vessel that underwent maintenance was in good repair. The reason of the explosion will be defined by a commission,” he said.

The emergency response group will examine the scene of the accident concerning a possible oil and petroleum products spill, he added.

An explosion rocked the oil tanker General Azi Aslanov sailing under the Russian flag from the Kavkaz port to Rostov-on-Don without a cargo on Saturday. There were 13 crew members onboard. Ten of them were rescued.

The cause of the emergency is being investigated. Safety violations and hot work might have caused the explosion, a source in the emergency services told TASS earlier. 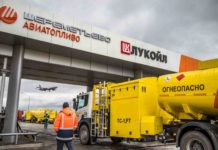 Fitch Maintains Forecast for World GDP Decline of 4.6% in 2020