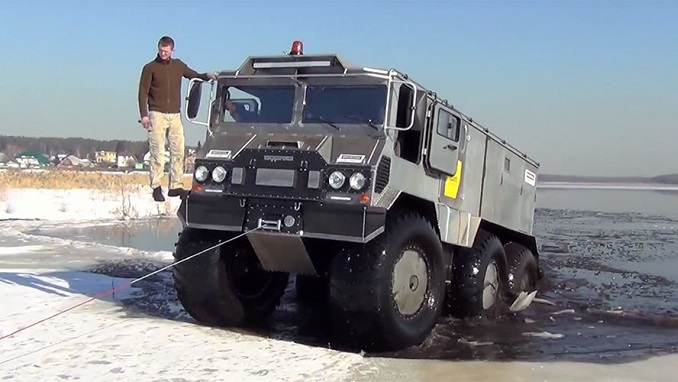 The heavy-duty vehicle is expected to enter serial production this year, will be used to transport passengers and cargo, according to officials.

The Burlak was developed by Russian engineers working in cargo, industrial and expeditionary Arctic cross-country vehicles. The team plans to produce up to 12 cars in the Ural region in one year, the chief designer of the project Alexey Makarov said.

The off-roader, tested in Chukotka, passed trials in the Kara Sea waters last year and was planned for use on the North Pole. The vehicle, designed in Ekaterinburg, may be used for driving on winter roads, and for crossing deep snow, which is an optimal variant for Chukotka, where regular roads are scarce.

Fashioned from an old Soviet BTR-60 armored vehicle, the Explorer is meant to fit a team, a kitchen, shower, and sleeping areas. To protect from the deadly cold temperatures, Makarov’s crew heavily insulated the vehicle along with making all of the engine components and systems accessible from the cabin.

The ATV may carry 500 liters of fuel and consumes 40 liters per 100 km. Some of the parts are in series production, and some original parts and units have been designed at the Makarov All-Terrain Vehicles Company.