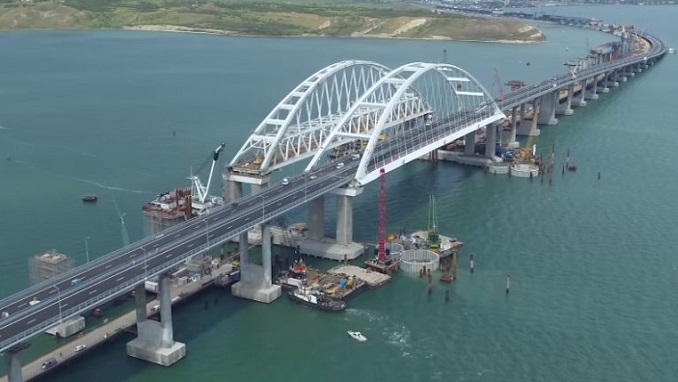 President Vladimir Putin drove across a new 12-mile bridge to Crimea in a large orange construction truck on Monday, inaugurating his latest megaproject and tightening Moscow’s claim to the disputed territory, The Guardian reported.

The bridge, finished six months ahead of schedule, established a land link from Russia to the Crimean peninsula, which the Russian military seized from Ukraine in 2014.

“This is a remarkable result, which makes Crimea and legendary Sevastopol even stronger, and all of us are even closer to each other,” Putin told a crowd of cheering workers after completing the roughly 15-minute drive at the head of a convoy of construction vehicles.

The bridge connects the Crimean city of Kerch, on the eastern coast, to the Russian mainland and is fed by local roads. But the opening was more theatrical than real because the main highways feeding the bridge on both the mainland and across Crimea to Sevastopol in the west, remain under construction.

The overall project, costing more than $7.5 billion and including a twin span for trains expected to open next year, is not due for completion until 2023.

Relations between Russia and Ukraine remain extremely fraught as a simmering conflict continues between Kiev and Moscow-backed separatists in Ukraine’s south-east. In 2016 the U.S. imposed sanctions on Russian companies that were helping to build the bridge across the Kerch strait. Ukraine has said the construction of the bridge shows blatant disregard for international law.

Putin pushed for the vehicular bridge to be ready for the summer travel season, matching the April opening of a large new airport at Simferopol, the capital of Crimea. According to analysts, the economic potential of both projects remains in question. Crimea has not proved popular with Russian tourists, and international sanctions block foreign cellphones and credit cards there, limiting visitors from elsewhere.

“It is important geopolitically because Russia now has a direct route from its territory to Crimea,” said Natalya Zubarevich, an expert on regional economic development. “The economic effects are secondary.”

Russia’s state-controlled media went out of their way to lavish praise on the bridge, calling it “the construction project of the century” and a work of art. “We have been waiting for the Crimean Bridge for over 1,000 years,” gushed one television correspondent, adding that the opening of the bridge was the main global news development of the day. One reporter also hailed the bridge as an example of “heroism of the workers.”

In Ukraine, President Petro Poroshenko called the bridge’s construction “illegal” and “the latest evidence of the Kremlin’s disregard for international law,” adding that it could be useful for a swift withdrawal of Russian forces.

U.S. Secretary of State Mike Pompeo also condemned the opening of the bridge.

“The bridge represents not only an attempt by Russia to solidify its unlawful seizure and its occupation of Crimea, but also impedes navigation by limiting the size of ships that can transit the Kerch Strait, the only path to reach Ukraine’s territorial waters in the Sea of Azov,” Pompeo said in a statement Tuesday.

aniwatcher app. Aniwatch Anime is another website offering audience to watch anime for free and viewers so far are quite impressed with the user-friendly interface