On April 11, the court released Calvey from detention and put him under house arrest.

According to investigation, Calvey, knowing about a 2.5-billion-ruble ($38 million) debt of the First Collector Bureau, a firm under his control, has organized the sale of its shares to Vostochny bank that has led to embezzlement.

Russia’s Investigative Committee claims that he committed a crime that could not be classified as business crime because he used a chain of sham companies settling the deal. Moreover, investigators say they have a PricewaterhouseCoopers audit report on the done deal estimating the sold shares at 600,000 rubles, which indicates an instance of fraud.

Calvey denies the allegations and insists that the deal was fair as both companies agreed its terms and stood for it, including a person reporting an alleged crime to law enforcement bodies. He noted that a report has been filed with police by a member of Vostochny bank board of directors Sherzod Yusupov.

According to Calvey, the real reason of his prosecution is a wide corporate dispute related to the control of the bank by two groups of shareholders: Baring Vostok and stockholders coming from Uniastrum Bank, which was reorganized and merged with Vostochny in early 2017.

Baring Vostok company founded by Calvey in 1994 focuses on private equity investments in the CIS and Russia. The company has invested in shares of Yandex, Vkusvill, Tinkoff Bank and other major projects. 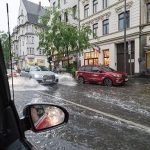 Residents of the Moscow Region July 7–8 expect a thunderstorm, rain with hail and wind with gusts of up to 22 meters per second,...

Rossiya Airlines has begun operating direct flights between Russia’s Vladivostok and Sochi on Monday, the first plane was 100% full, the airline said via...

Belarusian farmers will try to consolidate their positions on Russia’s food market after the pandemic-triggered economic slump is over, Belarusian Deputy Prime Minister Alexander...