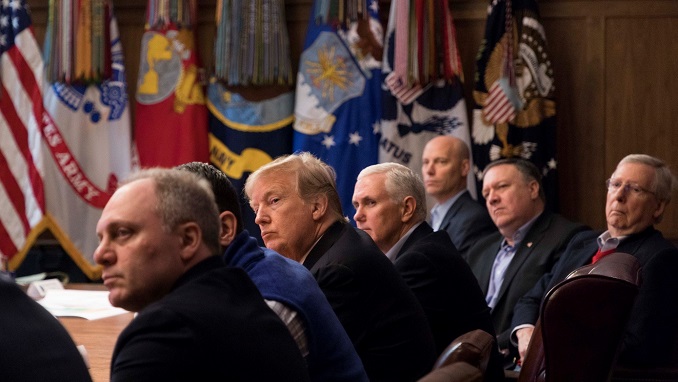 Some 11 Republican senators broke ranks with their leadership and the administration on Tuesday to side with Democrats in a showdown over sanctions on Russia, CNN reported.

The senators supported a resolution disapproving a Trump administration plan to ease sanctions on Russian companies tied to Russian oligarch Oleg Deripaska, clearing the way for formal debate followed by a final vote on the resolution.

The resolution is in response to last month’s announcement by the Treasury Department that it would lift sanctions on the core businesses of Deripaska, an influential Russian oligarch with connections to President Vladimir Putin. The companies include aluminum giant Rusal, its parent company En+ Group, and power firm EuroSibEnergo.

Earlier on Tuesday, Treasury Secretary Steven Mnuchin appeared in Congress in an effort to push Republicans to oppose the Democratic-backed resolution.

“I do disapprove of the easing of the sanctions because I think it sends the wrong message to Russia and to the oligarch — a close ally of Mr. Putin, Oleg Deripaska — who will in my judgment continue to maintain considerable control under the Treasury’s plan,” Collins said after the vote.

The development underscores the political sensitivity of the issue amid questions about President Trump’s relationship with Moscow.

Ahead of the vote, the top Democrat in the Senate, Chuck Schumer, urged the resolution’s passage, saying: “This is not the moment to give up a source of leverage over the Russian government.”