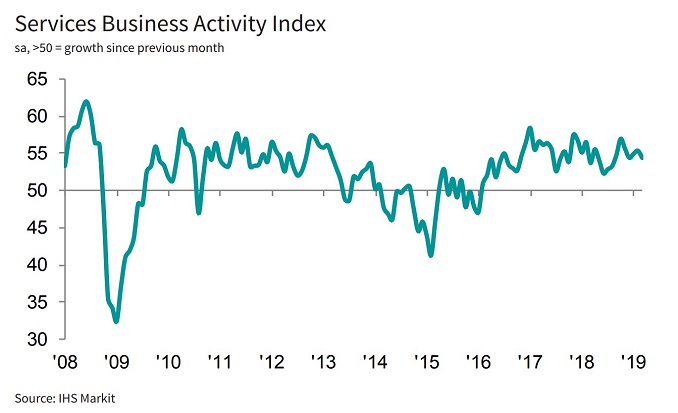 The index, which has stayed above the 50 mark that separates expansion from contraction since early 2016, fell to 54.4 in March from 55.3 in February, IHS Markit said.

“The pace of growth in new business also eased and was the least marked for six months. Nonetheless, the upturn remained strong and was supported by a sharp increase in foreign client demand. New export orders rose at the fastest pace since data collection for this series began in September 2014,” the information provider said in a press release.

“Business expectations moderated to a seven-month low amid reports of softer underlying demand and intense competition. Where an increase in output is predicted, firms link this to a sustained rise in new business and the release of new advertising campaigns,” it added.

The impact of a recent hike in value-added tax (VAT) continued to dwindle in March as inflationary pressure receded.

Business expectations fell to a seven-month low in March as surveyed companies said that intense competition and less robust demand could dent business activity over the next year.

Another survey on Monday showed Russian manufacturing activity expanded during the month, boosted by higher output and new business growth.

Russians Arriving from Abroad to Self-Isolate after PCR Test

With grain production in Russia expected at record highs this year, the country has continued boosting exports and extending the list of its potential...

Russia's dominant lender Sberbank is planning one of the biggest reinventions in its 179-year history as it seeks to join the likes of Apple and...

Russia on Thursday reported 6,595 new coronavirus cases in the last 24 hours, its highest daily increase since July 12. According to Reuters, authorities said...