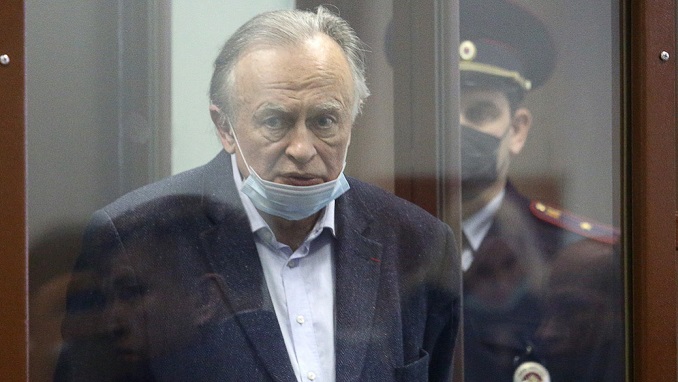 Oleg Sokolov, 64, who taught at St. Petersburg State University, was pulled out of the Moika River with severed arms in his bag last November. He confessed to shooting his former student and girlfriend, 24-year-old Anastasia Yeshchenko, then sawing off her body parts and attempting to dispose of them.

St. Petersburg’s Oktyabrsky district court found Sokolov guilty of murder and sentenced him to 12.5 years in maximum-security prison, the Fontanka.ru news website reported from the courtroom.

State prosecutors had requested a 15-year sentence for Sokolov while his defense team asked for half as long. Sokolov pleaded guilty but said he was driven to the crime by violent disputes with Yeshchenko and harassment from a longtime colleague and rival.

The recipient of France’s top state award in 2003, Sokolov has authored books on emperor Napoleon Bonaparte and often led historical re-enactments dressed as Napoleon. Reports after his arrest said he had planned to commit suicide at an imperial St. Petersburg landmark in a Napoleon costume.

Sokolov’s murder trial has renewed debate over Russia’s relaxing of penalties for domestic violence in 2017. Activists link the lack of legislative protections for victims and police inaction to a spike in domestic abuse which has been further exacerbated by nationwide coronavirus lockdowns this year.

Sokolov was sentenced as Russian lawmakers advanced a libel bill this week that introduces prison sentences of up to five years for wrongful accusations of sexual abuse.