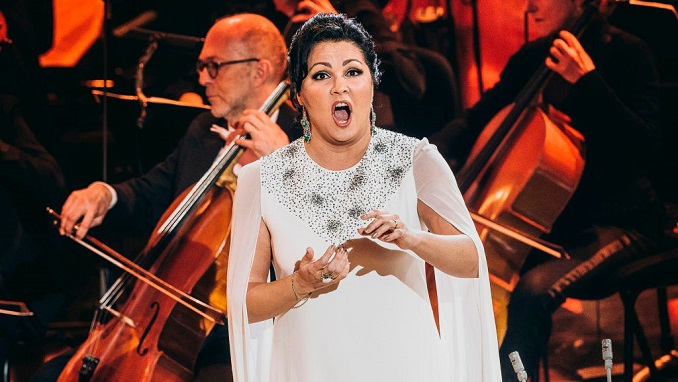 Russian opera star Anna Netrebko said on Thursday she had contracted coronavirus and was in hospital with pneumonia after performing at the Bolshoi Theater’s post-lockdown opening show, The Moscow Times reported.

The singer’s illness comes as two top Russian theater have suffered outbreaks of the virus shortly after reopening, raising fears over the safety of performers.

The 48-year-old soprano wrote on Instagram: “I’ve been in hospital for five days already with Covid pneumonia and will soon start recovering.”

“I came to hospital in time and they’re helping me. Everything will be alright, the devil is not so black as he’s painted,” she added.

She said that her husband, Azerbaijani tenor Yusif Eyvazov, had tested positive for antibodies to the virus, showing he had been infected earlier. He is currently performing in “Queen of Spades” at the Bolshoi.

Netrebko performed on September 6 and 8 in “Don Carlos” at the Bolshoi, the legendary theater’s opening show after lockdown.

The Bolshoi had to cancel the third performance of the Verdi opera, set for Sep 10, after Russian bass Ildar Abdrazakov tested positive for coronavirus.

Netrebko’s manager Maxim Berin told The New York Times that she had been unwell since September 9 but was now feeling better.

The news that Netrebko also caught the virus comes as the Bolshoi has mounted an ambitious new season including performances of Tchaikovsky’s ballet “Swan Lake” later this month.

It has put social distancing measures in place for the audience including compulsory wearing of masks and spaced-out seating.

The Mariinsky Theater in Saint Petersburg in mid-August suffered an outbreak of coronavirus affecting around 30 performers, most of them ballet dancers, with three people hospitalized, a city public health official told the state TASS news agency.

The theater said it was cutting ballet dancers’ rehearsal times as a preventative measure. It also had to postpone several ballet performances.

The Mariinsky Theater, known as the Kirov Theater in the Soviet era, held the first post-lockdown staging in its historic building on August 1.

Sheremetyevo Named as Most Punctual Among World’s Busiest Airports