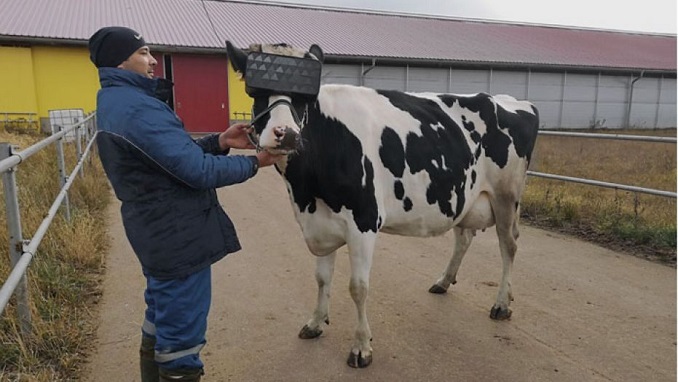 In an effort to increase the quantity and quality of the milk it produces, a farm just outside of Moscow is testing VR glasses for its cows, the Ministry of Agriculture of the Moscow region said this week, according to BBC News in Russian.

Each set of glasses is designed with the cows’ physiology and visual system in mind, enabling the animals to enjoy views of summer fields year-round.

The ministry accompanied the statement by photos of a cow trying out its fancy new goggles, while citing research data that show there is a link between how cows feel, emotionally, and the amount of milk they produce.

The experiments took place at the RusMoloko farm in Moscow’s Ramensky district.

In their first round of testing, the VR headsets decreased the Moscow-area herd’s anxiety and increased its average mood as expected, the authorities said. A group of veterinarians participated in the design and testing process for the new devices.

“Examples of dairy farms from different countries show that in a calm atmosphere, the quantity, and sometimes the quality, of milk increases markedly,” the ministry said.

Researchers will examine the effects of the programme in a long-term study. The developers reportedly hope to expand the project if positive results continue.

Russian dairy farmers aren’t the only ones going the extra mile to keep their cows happy and improve product, though. Some Japanese Wagyu farmers set mood lighting, among other tricks, to keep their cows calm and producing the best beef possible. Others play them music, which one Missouri farmer says leads to better milk.

online anime AnimeDao How NOT to Summon a Demon Lord Ω