A Russian Economy Ministry forecast of the ruble’s average exchange rate this year was revised to 66.4 per U.S. dollar from 63.9, minister Maxim Oreshkin told members of the State Duma (lower house of Parliament) on Wednesday, according to Reuters.

According to the minister, the revision was due to changed assumptions for the euro-dollar exchange rate, as well as geopolitical factors, such as U.S. sanctions against Russia over its alleged interference in a number of foreign countries.

“It’s clear that the sanctions, which increased relatively over the last year, do not allow us to hope for a sharp strengthening of the ruble from previous levels,” Oreshkin said in the State Duma.

The ministry’s inflation forecast of 4.3 percent did not need a revision, the minister said, adding the rate should fall below 4 percent in January 2020.

“Speaking of 2019, I’m sure that the acceleration in inflation and the slowdown in economic growth will be temporary,” he said. The ministry also kept its forecast for GDP growth in 2019 at 1.3 percent, Oreshkin added.

Russia’s economic growth slowed in the last two months of 2018 from the 2.5 percent seen in October, when the country saw higher agriculture and industrial output.

In January, the ministry said it expected economic growth to reach 2 percent in 2018, after previously forecasting growth of 1.8 percent for that year. The 2019 forecast for the price of Urals oil was cut to $62.8 per barrel from $63.4. 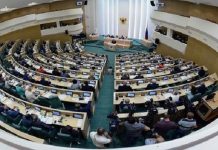 Russia’s parliament on Wednesday approved a five-year extension of the New START nuclear arms control treaty with the United States, which a senior official...

The upper chamber of the Russian parliament on Wednesday called on the United Nations and the Parliamentary Assembly of the Council of Europe (PACE)...