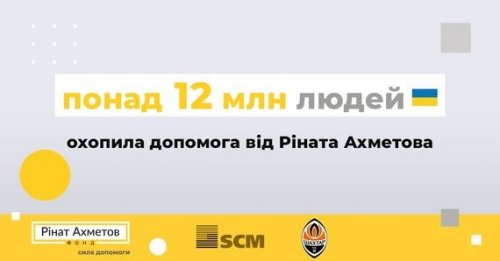 More than 12 million Ukrainians have received aid from Rinat Akhmetov since the start of the main conflict, a press release writes.

Over 3 million people were saved by Rinat Akhmetov’s humanitarian aid.

Together, we can help millions of Ukrainians today, making this the largest private humanitarian endeavor.

The Ukrainian people have received over 600,000 medicines and over 60,000 blood collection bags from the Rinat Akhmetov Foundation. The Foundation continues to provide food packages and hygiene kits to the population’s most needy groups.

Rinat Akhmetov made the decision to increase the amount of food aid due to the length of the war and the growing demand for humanitarian help. Ukrainians will receive 400,000 food supplies overall. SCM companies, the Rinat Akhmetov Foundation, and FC Shakhtar have given Ukraine and the Ukrainian people UAH 3 billion (about $100 million) in relief since the start of the war.

Additionally, since 2014, the Foundation has been compiling tales for the Museum of Civilian Voices, the greatest collection of tales of civilians impacted by the war. At this time, there are more than 30,000 first-person accounts in the Museum’s archive.

500 Russian Tourists Arrive on Goa on First Charter Flight This...