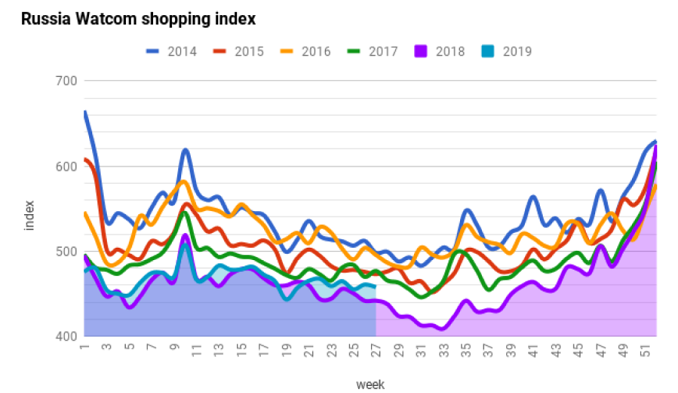 2020 had got off to a good start, with the Watcom Shopping Index holding up and matching last year’s performance despite the traditional dip following the March 8 International Women’s Day holiday.

But things changed dramatically on March 30 when Sobyanin put the entire capital on a stringent lockdown, banning residents from leaving their apartments for any reason other than a few essential trips outside. Moreover, shopping anywhere other than a local “produkty” further than 100 meters from home is now banned.

Watcom’s figures show the indicator fell by 70.9% year on year last week. It also reveals the crisis building as Muscovites became increasingly concerned about the spread of coronavirus (COVID-19) virus that took off in the week starting March 7, when there were only seven officially confirmed cases, and accelerating rapidly after March 20.

The traffic in the malls began to fall sharply at the same time, dropping by 11% on March 18th and 20% on March 19, but only really crashing after the lockdown was imposed this week. Traffic was down 70.9% on March 30, while the infection rate had soared to 1,836 cases the same day, almost all of which are in the capital. Two days later and the number of officially recorded cases has leaped to 2,337 as of April 1.

However, as the chart shows, malls have lost some of their appeals in the last two years thanks to the increasing volume of online shopping that now makes up 4.5% of the total, a trend towards doing more shopping in smaller, but more local malls in residential areas, and the six-year stagnation in real incomes.