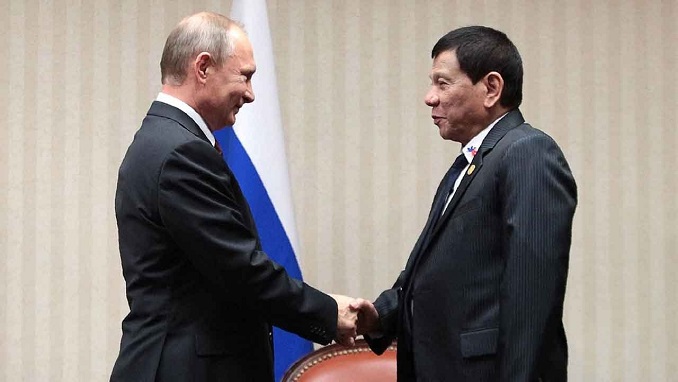 Controversial Philippine president Rodrigo Duterte has said his country seeks to further boost its alliances with Russia and China, particularly on trade and commerce, CNN reports.

“And the economics, I’m veering towards so many… I’d like to open new fronts with Russia (and) with China,” Duterte said in an interview with Kremlin mouthpiece RT on Friday.

“We have increased in trade and commerce. It’s robust. And maybe if I could start trading with Russia it would be good, it would be that fine,” he added.

The President renewed his intent to forge closer ties with Russia and China, as he praised the two countries for “respecting the sovereignty of the Philippines”.

He made the remarks, as he expressed dismay over the supposed failure of the United States, a long-time ally of the Philippines, to respect the country’s sovereignty.

“(The U.S.) continues to look at us as vassal state because we’re under Americans for 50 years and they lived off the fat of the land before we got our independence. We went to war against them. So if I cannot get a credible posture from the Americans, I can get it from the Russian and the Chinese government(s), it’s because they respect the sovereignty of the country, which America is totally lacking,” he said.

The president explained that the plan to purchase military equipment from Russia has been delayed due to budget constraints.

“There’s always not enough to go around with… Just because Russia is a friend, it doesn’t follow that we abscond or do not pay our debts,” Duterte said.

“But we have placed the orders now — 12 military helicopters, cargo choppers,” he said.

Last year, the Armed Forces of the Philippines said it was considering buying 16 chopper units as well as arms from Russia as part of its modernization program, which Duterte wants completed before his term ends in 2023.