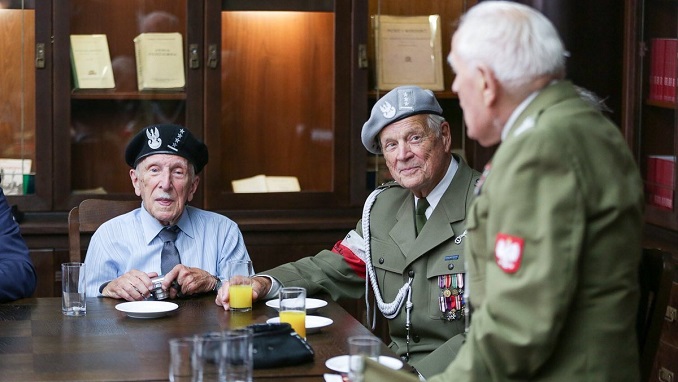 Relations between Poland and the United States have been good for decades, but can still be much better, as both countries’ government are new and they are both trying to keep up the pace of modern politics, Dr. Julius Kulski a hero of the World War II said in an interview with Focus Washington’s Brad Klapper.

The renowned architect and passionate advocate of Polish-American relations which have seen the trajectory of the ties between the countries for decades, claims that both the governments can do much better to contribute to the mutual relations as they are “finding their feet”.

There is a lot of controversy at the moment with some of the directions that the new Polish government has taken, particularly they pertain to the independence of media, judiciary, and the controversial new holocaust law that has been introduced.

When asked whether he feels that the Polish government is being accurately depicted in the stories reported by western and American media, Dr. Kulski said that just like the current government of the United States, Hungary and Poland are not presented well by the European Union, and there is a constant problem around this issue. He also claims that the current government in Poland is very democratic and is interested in Polish history and in reviving it and taking care of it. Dr. Kulski also added that finally, Poland has enough funds for renewal of the cemeteries, such as Jewish, Polish,  as well as Christian cemeteries.

According to him, a lot of the criticism towards these countries is unjustified and that it’s just a question of different viewpoint like the left and the right in politics.

Dr. Julius Kulski has a really fascinating history himself, as he is a descendant of a former chief Rabin of Poland, as well as, of former King of Poland. His father was a protestant and deputy mayor of Warsaw, so he is sort of the totality of Polish history.

Asked whether he has concerns that Poland is regressing in its democratic commitment, Dr. Kulski says that this is not the case and that it is quite the opposite.

“You know, my own experience of five years of German occupation, I was involved with the resistance in the Jewish ghetto and outside of the Jewish ghetto and I have seen what the Polish government was doing. And right now, politics in America and Israel are using these facts and changing history. For example, their claim is that 2000 Christian Poles handed over their brothers, Jewish Poles to the Gestapo. But little did they know is that when Germans entered Poland, they offered German citizenship so-called ‘Volksdeutsche’ to Poles. Those who took this citizenship were considered traitors. They were 125.000 in the general government of occupied Poland, and 2,500,000 in the part that was incorporated. So in the big cities and Warsaw, these citizens were considered Christians by the Polish Jews which is a fact, but they did not know that they were traitors,” he said.

“Polish government in exile passed laws during the war, passing the death sentence upon anyone who handed over Polish Jews to the Gestapo. Our side and the commandos were executing the orders of the court system. I, myself, killed a number of Volksdeutche and so, it’s really upsetting for me to see history being rewritten for political reasons,” Dr. Kulski added.

When asked who does he think is trying to divide Poland from the United States, Dr. Kulski gave a really straight forward answer that it has always been Russia.

“It’s always been Russia. It started with Katherine the Great. She wrote a marvelous paper on how to divide Poles and since Poland was occupied for 125 years by Russia, they were able to do a great job, and then after 5 years of German occupation, we have 40 years of Russian occupation. They are still succeeding at it because by weakening Poland they will have less trouble getting to Western Europe,” Dr. Kulski noted.

Doctor Julian Kulski, as one of the last surviving Polish World War Two heroes, says that there should be a joint Polish-Israeli historical committee that will determine exactly how many Jews were saved during the war and how many crimes against them were made in Poland.

When asked by Bradley Klapper from Focus Washington, if there is a way to improve U.S.-Polish relations now, he said that spreading the truth is the best place to start.

“I would say, spreading truth about those years, which are so sensitive right now for both sides, and the facts for me are the answer.”

He also said that he recommends a joint Polish-Israeli historical committee that will be searching for facts on how many criminals there were and how many good Samaritans who saved lives of children and babies were.

“I know of individual who smuggled Jewish babies out of the ghetto in a carton as soon as they were born, and was putting them on a street cart until it was picked up by the underground,” he said.

“She kept names of the mothers so after the war she was able to let the survivors know their true family name, and that’s few hundred that she managed to do. There is the zookeeper wife, the Schindler list and there is my father who would, through the city hall, save thousands,” he added.

Kulski ended his interview by saying that Polish politics have made mistake by issuing laws before checking if they have the public support and that might be the reason for the worsening relations between Poland and Israel.

Doctor Julian Kulski was only 11 years old when the war started shortly after in order to hide from the occupiers he descended into the underground. Dr. Kulski became a member of the resistance, first in the ranks of the Polish Boy Scouts, the ZHP, and then in the Gray Ranks, the Scout’s paramilitary organization. It was Kulski’s Scoutmaster Ludwik Berger (pseudonym of Goliath) who introduced him to the Armia Krajowa, Poland’s formal underground Army, the largest underground resistance force during the war.

Global COVID-19 Death Toll up 6% in Past Week: WHO