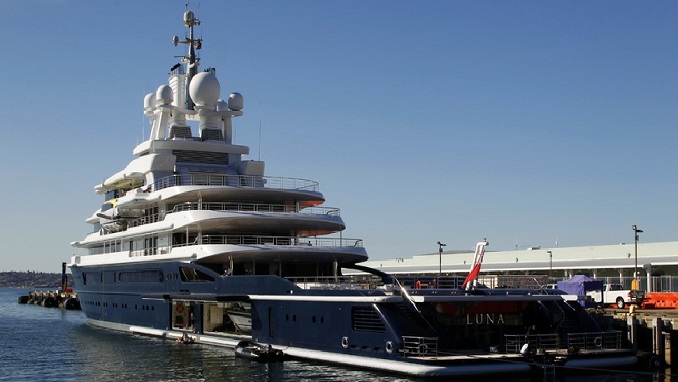 A Russian tycoon has recovered his $615 million superyacht in the latest twist of his long-running divorce, the Sidney Morning Herald reports.

Billionaire Farkhad Akhmedov announced that a Dubai court had overturned an earlier decision to seize the ship-from him.

Previously a UK court ruled that the former oil and gas tycoon should pay his former wife Tatiana Ahkmedova $850 million in a divorce settlement.

The lower courts in Dubai impounded the superyacht – named Luna – as part of a global freezing of the businessman’s assets.

But the appeals court in the Middle Eastern emirate found the decision unenforceable and overturned the seizure.
The Luna was built for Russian billionaire Roman Abramovich, an old friend of Akhmedov, before he bought it in 2014. It has nine decks, space for 50 crew, two helipads, a vast swimming pool and a mini submarine.

“Mr Akhmedov is delighted but not surprised by today’s court decision in favour of the Akhmedov family trust,” a spokesman for the oligarch said.

But lawyers for his ex-wife reportedly said she would not be deterred.

“Akhmedova will simply continue to pursue her claims in the Dubai Courts,” a statement reported by Reuters says.
The 2017 divorce settlement is believed to the biggest in UK history. Akhmedov has insisted he and his wife divorced in Russia in 2000. But a UK court found no evidence of this and ordered his global assets to be frozen.

Russian Investor Cashes in on Xiaomi Despite Share Price Drop