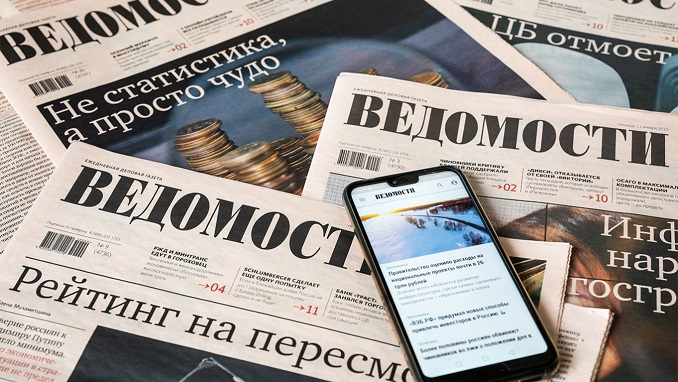 Journalists at the Russian business newspaper Vedomosti have rebelled against their new management after the paper’s editor was accused of banning criticism of constitutional amendments backed by Vladimir Putin and the use of data from an independent pollster, Meduza reports.

In a blistering opinion article published on the newspaper’s website on Thursday, the editorial staff said the new editor had undermined trust by massaging headlines about the Russian state energy company Rosneft and blocking a recent column critical of the firm and its boss, Igor Sechin.

The editorial, titled “The New Vedomosti”, was published without the editor’s consent, a staff member confirmed, adding that it wasn’t expected to stay online for long.

A day earlier, the newspaper’s media reporter, Kseniya Boletskaya, had publicly complained that Shmarov had banned negative coverage of President Vladimir Putin’s plans to change the constitution to allow him to extend his rule until 2036.

Anyone who flouted the ban would be fired, she said.

“Changes of this kind undermine trust in the publication,” the editorial article said on Thursday, referring to the alleged ban on publishing offending opinion polls.

Staff, it said, were determined to defend the newspaper’s values.

“Having lost its reputation, Vedomosti will become another dependent and managed media outlet whose aim is not to satisfy readers’ needs with news that has been verified and quality analysis, but to serve the interests and ambitions of its official and secret owners,” it added.

Russia Says It Has Begun Pulling Out Troops from Crimea after...

Russian GDP to Grow 3-3.5% in Next Years, Minister Says