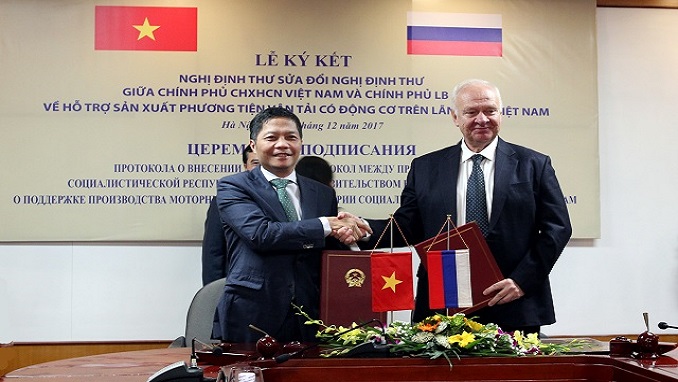 Russian exports to Vietnam have been accelerating in the last two years, while the Asian country’s exports to Russia only grew by 8 percent last year compared to 35 percent the previous year, a Russian official has said, according to VN Express.

Dmitriy Makarov of the Trade Representation of the Russian Federation in Vietnam (TRRV), said at the Vietnam-Eastern Europe forum Wednesday that Vietnam’s garment exports only increased by 6 percent, down from 38 percent in 2017, footwear exports barely expanded (16 percent in 2017), while knitwear shipments decreased by 10 percent. The country’s agricultural exports also fell by 10 percent, he said.

According to TRRV, though Russia’s tariffs on imports from Vietnam are low, Vietnamese textile and garment products still are not able to compete with Russian-made goods because their prices are higher.

Makarov said Vietnam’s textile and garment industry is highly developed and its brands like An Phuoc, Viet Tien, Blu Exchange, Ninomaxx, Juno, Ren, and Bitis are as good as European products in terms of style and quality, and could easily be exported.

But the Russian market has not heard of these brands yet, he said.

A TRRV executive said that many Russian textile companies are considering moving their factories from China to Vietnam to avoid the U.S.-China trade war.

Last year Vietnam was the 23rd largest trading partner for Russia, four places up from 2017. Russia was the 20th biggest partner for Vietnam, up six places, TRRV reported.

Telegram Will Cooperate with Terror Probes Everywhere, Except in Russia