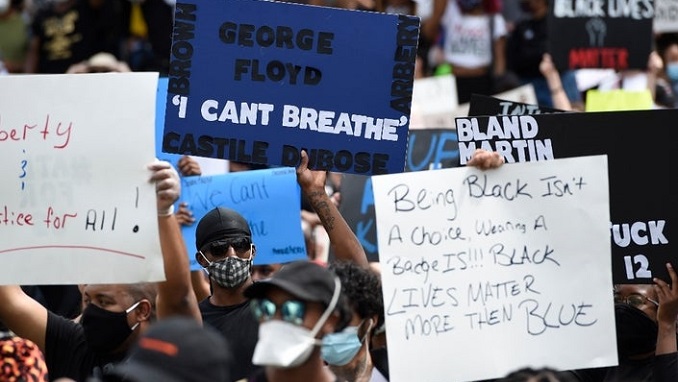 The unrest in Minnesota demonstrates that serious human rights problems have accumulated in the United States, the Russian Foreign Ministry said in a statement on Friday, TASS reported.

“This incident is not the first in the string of incidents exposing lawlessness and unjustified violence by ‘guardians of law and order’ in the United States,” the Russian foreign ministry said in a statement. “Such high-profile crimes are being committed by US police officers too often. The U.S. has evidently accumulated endemic problems in the human rights sphere.”

Moscow called upon Washington to thoroughly investigate the incident.

“We call upon the U.S. authorities to return to the fulfillment of international obligations, to bring its national legislation into accordance with basic UN principles on the use of force and firearms by law enforcement officers, and, of course, to thoroughly investigate the murder of George Floyd,” the ministry said.

In the past years, the United States has seen a series of incidents, in which police officers killed unarmed civilians. Those incidents often triggered large-scale unrest in the country.

In the latest of those incidents, mass protests and unrest broke out in Minnesota and several other U.S. states after a video of George Floyd’s May 25 detention was posted online. Floyd, a black man suspected of paying with fake money at a local shop, was handcuffed by a white police officer, who put him to the ground and pressed his knee firmly against the man’s neck. Floyd pleaded that he cannot breathe, but police paid no attention to that. Shortly after, Floyd died in hospital. The four police officers who arrested him were sacked on May 26. One of them – Derek Chauvin, the officer who had his knee on Floyd – was arrested on Friday afternoon and charged with third-degree murder and manslaughter.

Protests to demand justice for Floyd, which began in Minneapolis on May 26, grew into clashes with police, shop looting, and arsons. The state of emergency has been declared in the city. Minnesota’s National Guard was called to step in to “help provide security and restore safety.”