Home Environment Russian Expert Warns It Could Take Only 20 Years for Polar Bears... 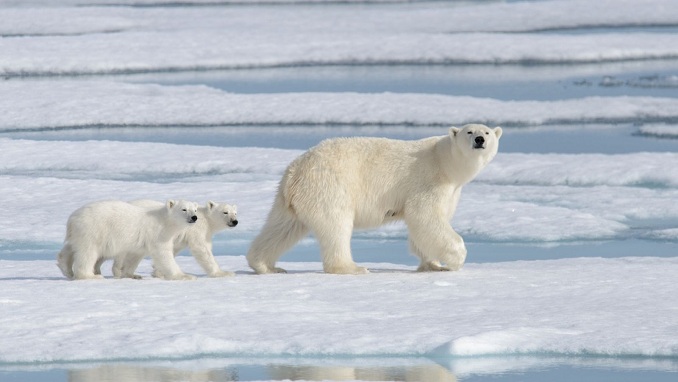 A shocking new study has found that polar bears could be made extinct by the end of the century unless decisive steps are taken to combat climate change. But a Russian zoologist believes it could happen before 2040, Russia Today writes.

In an interview with news agency NCN, Russian TV presenter and prominent zoologist Nikolai Drozdov predicted that polar bears will be extinct in the Arctic within a generation.

“According to my most moderate forecasts, the extinction of the species may occur even earlier than 2100. I think that it will happen in 20 years,” he said.

The initial report, published in the British journal Nature Climate Change, has revealed that some polar bear populations are already on the brink of survival, due to shrinking ice cover in the Arctic Ocean. Less ice means that the bears are forced to travel a greater distance, or move inland, to find food. The scientists behind the study calculated that if the world maintains the present high levels of greenhouse gas emissions all but a few will disappear from the wild by 2100.

According to Dr. Stephen Amstrup, chief scientist at Polar Bears International, the survival rate of newborn polar bears will decrease as “the females won’t have enough body fat to produce milk to bring them along through the ice-free season.”

The reason for Drozdov’s much more pessimistic prediction is also nutrition. According to him, male polar bears can’t find food and don’t go into hibernation, while females have offspring which need to be fed – but there’s not enough.

In 2019, Russian polar bears made headlines across the planet when dozens were seen trying to enter homes on the Arctic island of Novaya Zemlya. According to Russia’s World Wildlife Fund (WWF), the animals were being forced into villages to search for food.

anime stream. AnimeHeaven is the best animes online website, where you can watch anime online completely free. No download, no surveys and only instant premium streaming of animes.

stream anime online How NOT to Summon a Demon Lord Ω

Naftogaz to Demand $17.3bn from Gazprom in New Lawsuits: CEO