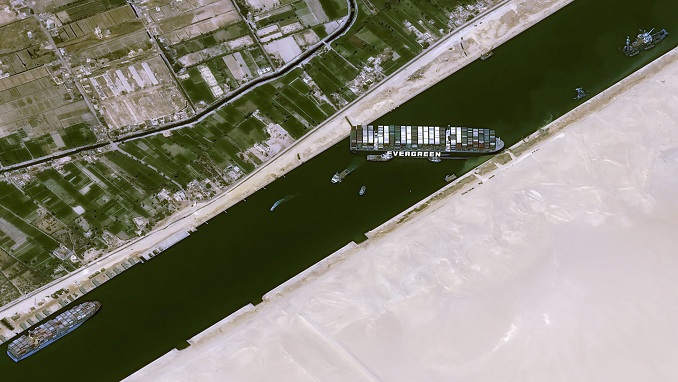 The incident with the Ever Given container ship in the Suez Canal allowed Russia and China to promote their trade routes more successfully as well as to challenge the American globalization model, French journalist and writer Francois Lenglet, who specializes in economic issues, stated on Wednesday, TASS informed.

“If the incident’s economic consequences are insignificant, then there are indeed geopolitical aftermaths. Immediately after the accident, Russia proposed an alternative route between the East and Europe, which is 5,000 km shorter than through the Suez Canal. China did the same with its Polar Silk Road,” the Figaro newspaper quoted Lenglet as saying.

The French journalist emphasized that the ability to create and control trade routes has always been considered a tool of power. Furthermore, he recalled that the Suez Canal was built by Europeans, including the French. Lenglet noted that Great Britain was responsible for protecting it after World War I. “And eventually it gives way to a new world leader, the United States, which has controlled trade routes throughout the 20th century,” Lenglet went on to say.

“Today, US dominance is challenged by China and Russia, who want to offer their own model of globalization with their [trade] routes,” the journalist concluded.

On March 23, one of the world’s largest container ships Ever Given, which sails under the Panamanian flag, ran aground due to strong winds and sandstorms. The ship with a displacement of 220,000 tonnes and a length of 400 meters completely blocked the navigation along the canal. As a result, about 400 ships queued up for passage. The vessel was freed on Monday.

The Suez Canal handles 12% of the world’s cargo traffic, while it is one of the busiest waterways for oil tanker shipments worldwide. As many as 8% of vessels carrying liquefied gas pass through it. In total, some 19,000 ships use the canal per year or more than 50 per day.

Russia’s Energy Ministry reported that the Northern Sea Route’s volume of loading had great potential for expansion after the Suez Canal incident, noting that it expected further growth in supplies along this route. The ministry recalled that Russia has a unique geographical position, which gives it “natural advantages in the world energy market in terms of access to the main consumer markets, as well as the speed of the fuel and energy goods’ delivery.” According to Russia’s Energy Ministry, in 2020, the Northern Sea Route’s cargo traffic exceeded the scheduled values and reached almost 33 mln tonnes, including over 18 mln tonnes of liquefied natural gas.

Russia Has No Data on Chemical Weapons in the Country, Kremlin...