The reason for the recall was the fact that “frequent shocks and a range of rebound of the entire suspension on uneven roads,” that can increase pressure on the link which may lead to cracks, the report says.

Rosstandart stressed that cracks on the toe link increase the risk of accidents while driving.

All repair work will be carried out free of charge for vehicle owners, the company said.

The restructured company will focus on commercial vehicles, while passenger vehicle production will cease by the end of June, the company said.

Ford was the first international carmaker to launch vehicle assembly in Russia, opening a plant in St Petersburg in 2002. In 2011, it set up a joint venture with Sollers in which Ford and the Russian company each hold a 50 percent stake, but Ford has controlled the business since buying up preferred shares. 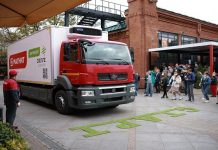 Russia’s GDP Expected to Contract by 4.8%

Iran to Work on Visa-Free Regime With Russia