All accusations against Russia of trying to meddle in the electoral processes in the United States are totally unfounded, Kremlin Spokesman Dmitry Peskov told reporters on Thursday, as reported by TASS.

Referring to remarks by Director of U.S. National Intelligence John Ratcliffe that Russia and Iran allegedly seek to influence elections in the United States, Peskov noted that he was commenting on the issue “with regret.”

“Accusations are pouring in every day, they are all absolutely groundless, they are not based on anything. It is rather a tribute to the domestic political processes related to the upcoming [U.S. presidential] election,” he said.

Ratcliffe earlier alleged that Russia and Iran had obtained American voter registration data and sought to influence the election. The issue of potential meddling in U.S. elections is raised on a regular basis in connection with U.S. officials’ statements on Russia’s involvement in such actions. Moscow has rejected such allegations more than once. 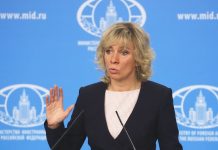 Sri Lanka Plans Ads in Russia to Woo Back Tourists after...