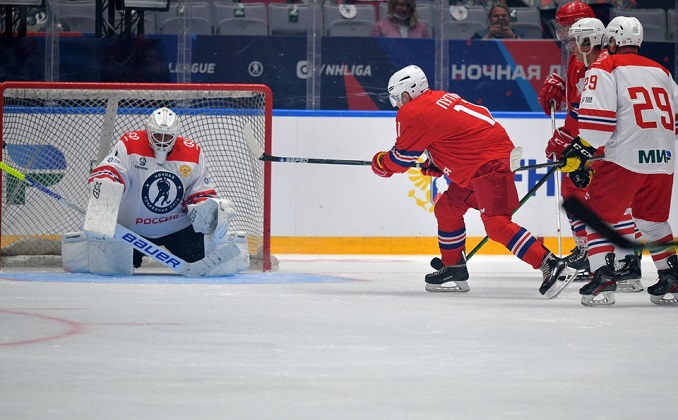 Russian President Vladimir Putin took part in an amateur league of ice hockey scoring several goals in the game that took place for the first since the pandemic started, Reuters reports.

Putin, who was inoculated against coronavirus more than a month ago, said earlier on Monday that he had his protective antibody levels tested and that the test showed great results as generated by the vaccine.

The president wore a full ice hockey kit and a #11 shirt, playing in front of an audience that showed up for the indoor gala event hosted by the amateur Night Hockey League in Sochi.

Set up in 2011, the league brings together former ice hockey stars, businessmen and Russian politicians. Putin occasionally joins in for all-star events. The last time Putin played was in Dec. 2019, when he scored eight goals.

Putin, a judo black belt who has often showed off his sporting prowess, was seen hugging and fist-pumping players and handing out awards on the ice — marking a change from many socially-distanced appearances during the pandemic.

Monday’s game ended with a 13 to 9 win for Putin’s side, with the president scoring nine goals, Interfax news reported.

Putin noted earlier that at least 21.5 million Russians, which is some 15% of the population had now been vaccinated against COVID-19 and urged all to follow suit.

“We need to actively continue getting tested (for coronavirus) and getting vaccinated,” he said in comments posted on the Kremlin website. He added that the number of daily cases was holding steady.

West Annoyed That Truth about Developments in Ukraine is Reaching UN