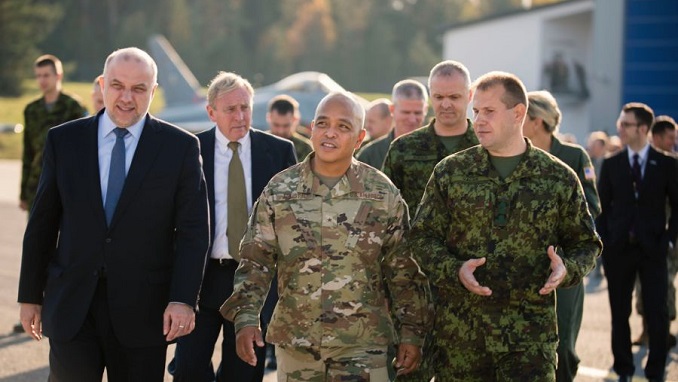 Russia considers the use of multiple launch rocket systems by the U.S. armed forces during the military exercises in Estonia to be provocative and extremely dangerous for regional stability, Russian embassy in Washington said in a statement released on Monday, TASS reports.

“We drew attention to reports, in particular in the Washington Times, containing anti-Russian invective and the American press information support of the U.S. Armed Forces’ maneuvers in Estonia from September 1 to September 10 using multiple launch rocket systems in the immediate vicinity of Russian borders (110 km). The Russian Federation has repeatedly proposed to the United States and its allies to limit training activities and to divert the exercise zones from the Russia-NATO contact line. We consider the actions of the U.S. Armed Forces in Estonia provocative and extremely dangerous for regional stability,” the Russian diplomats noted.

“Why is this demonstrative saber-rattling? What signal do the NATO members want to send us? Who is actually escalating tensions in Europe? And this is all happening in the context of an aggravated political situation in that region of the European continent. A rhetorical question is – how would the Americans react in the event of such shooting by our military at the U.S. border?” the embassy added.

From September 1 to 10, joint firing of an infantry brigade of the Baltic Armed Forces and the 41st Field Artillery Brigade of the U.S. Army will take place in Estonia. This is the first live firing by the U.S. artillery outside the permanent base in Europe.

Putin Picks Officials Based on Efficiency, Not Party Affiliation — Kremlin