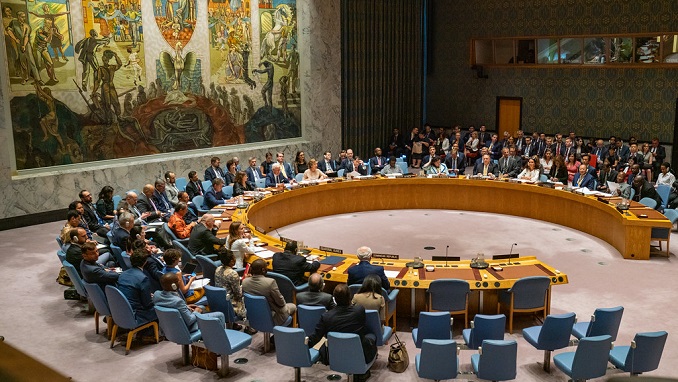 The UN Security Council discussed the need to ensure verification of a ceasefire in Nagorno-Karabakh, Russian Permanent Representative to the United Nations Vasily Nebenzya told reporters on Monday after a closed-door meeting on the disputed region, TASS reported.

“There is a need to ensure verification, I think that’s the most pressing issue now, since the agreement on a ceasefire has been reached it was not observed,” said Nebenzya, who presides over the UN Security Council in October. “The major question is how to verify the ceasefire, which is being violated.”

According to Nebenzya, there were reports that the Russian defense minister had discussed with his Armenian and Azerbaijani colleagues how to implement this verification mechanism.

“This issue was raised of course at the consultations and the Council was pretty much united on how they see it,” the diplomat said. Meanwhile, he explained that a special mandate of the Security Council would be required for sending a UN observer mission to the region. “That’s not an easy and immediate thing,” he said.

The Russian envoy did not rule out that the verification process could be implemented by the Organization for Security and Cooperation in Europe, which leads the settlement. “Who will be there and in what capacity, who will be actually verifying it – that’s still a question being discussed.”

Renewed clashes between Azerbaijan and Armenia erupted on September 27, with intense battles raging in the disputed region of Nagorno-Karabakh. The area experienced flare-ups of violence in the summer of 2014, in April 2016 and this past July. Azerbaijan and Armenia have imposed martial law and launched mobilization efforts. Both parties to the conflict have reported casualties, among them civilians.

As a result of the Russia-initiated consultations in Moscow Baku and Yerevan agreed to cease fire starting from 12:00 local time of October 10 for humanitarian purposes for exchanging prisoners of war and bodies of the dead. However, the ceasefire was violated later.

The conflict between Armenia and Azerbaijan over the highland region of Nagorno-Karabakh, a disputed territory that had been part of Azerbaijan before the Soviet Union break-up, but primarily populated by ethnic Armenians, broke out in February 1988 after the Nagorno-Karabakh Autonomous Region announced its withdrawal from the Azerbaijan Soviet Socialist Republic. In 1992-1994, tensions boiled over and exploded into large-scale military action for control over the enclave and seven adjacent territories after Azerbaijan lost control of them. Talks on the Nagorno-Karabakh settlement have been ongoing since 1992 under the OSCE Minsk Group, led by its three co-chairs – Russia, France and the United States.