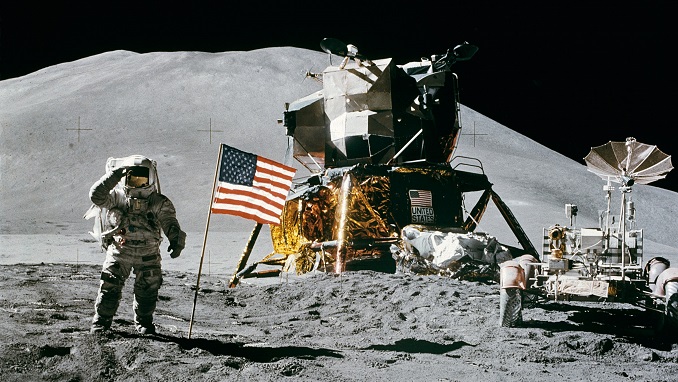 Almost fifty percent of surveyed Russians think that the U.S. government “falsified” the Apollo expeditions to the Moon, with just 31 percent absolutely sure that American astronauts walked on the surface of Earth’s satellite, RT reported.
That’s according to a new survey by pollsters WCIOM, who questioned Russians about their attitudes to popular conspiracy theories.

The study revealed that 94 percent of participants believe Earth is spherical, with just two percent thinking it is flat. The released data suggests that the lack of knowledge about Earth’s true form is not due to skepticism, or a penchant for conspiracy, but perhaps instead down to a lack of secondary education – only 82 percent of those who didn’t complete high school know about the shape of the blue planet.

When it comes to aliens, Russians are far more split. Of those questioned, 36 percent said they are completely sure that extraterrestrial civilizations visit Earth, with 13 percent believing that the authorities are keeping such information secret. Less than half (48 percent) believe that there are no aliens at all.

The survey also revealed that one-fifth of Russians (21 percent) think vaccines are dangerous or useless, with just 72 percent believing them to be effective.

Aside from internationally well-known conspiracy theories, WCIOM also asked about certain local issues. The pollsters discovered that 60 percent of Russians believe certain people are trying to amend historical facts “to harm Russia, to belittle its greatness.”

The Misfit of Demon King Academy: History’s Strongest Demon King Reincarnates and Goes to School with His Descendants (Dub)