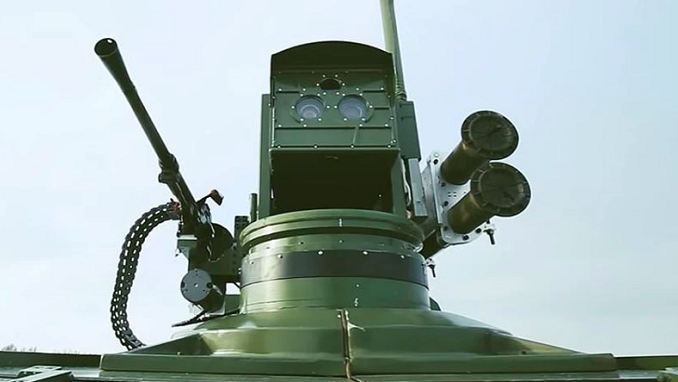 Alexei Bogdanov, Chief Designer of the Android Technics Research and Production Association and Head of the Marker Project Lab, told TASS on Wednesday that the Marker robotic platform is capable of simultaneously attacking targets with multiple kinds of weaponry.

“The Marker employs a novel drive solution in which an optoelectronic instrumentation unit that conducts observation, locks on, and tracks an object is located in the center and has its own separate drives, while the drives for mounting the payload (armaments) are located on the left and right sides and operate independently in a mode unrelated to each other. This configuration allows weaponry to hit targets at the same time,” according to the primary designer.

According to him, the fighting robot’s precision and speed allow it to hit both terrestrial targets and mini-drones.

Dmitry Rogozin, head of Russia’s State Space Corporation Roscosmos, previously said that the Marker robotic vehicle, configured as a security system, has started patrolling the Vostochny spaceport in Russia’s the Far East. He indicated that the robotic platform may be commanded remotely as well as autonomously.

The Marker experimental robotic platform was created as part of a 2018 collaborative initiative between the Advanced Research Fund and the Android Technics Research and Production Association. The project’s goal is to create and conduct large-scale testing of ground robotics and fundamental robotic parts.