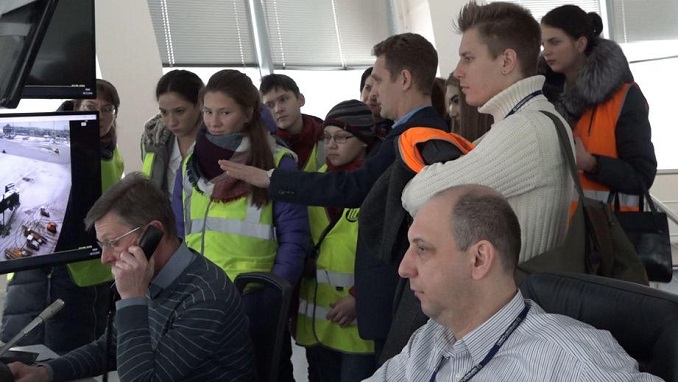 Sheremetyevo Airport’s staff held a tour for high school students from the Moscow region, during which they had the opportunity to meet pilots, flight attendants and dispatchers. The event was organized within the pilot project “Future Personnel for the Regions,” 360tv reported.

There are about 60 air traffic controllers in the Russian aviation industry. Liza, a student from the Mytishchi school, had the chance to watch them work and to gain experience, dreaming that in a few years she could also join the ranks of the airport staff.

“Ever since childhood I wanted to become a pilot, but I have problems with my eyesight, and also being a women pilot.. There are stereotypes that can be difficult,” she said.

The high school students even came up with a joint project, called “Mobile Air Show”. The project would include free excursions around the airports and meetings with famous pilots and flight attendants. Sheremetyevo Airport announced that it is interested in the idea, and its employees organized a tour, inviting the best dispatchers and pilots to help the children further develop the project, 360tv added.

The main goal of the “Future Personnel for the Regions” project is to help young people understand how they can participate in the development of their region.

“At the moment the project is being implemented in seven regions. Starting from next year, the plan is to expand to 49 or 46 regions,” public school teacher Olga Markina said, adding that more than 200 high school students are interested in the pilot program.

Gazprom to Develop Baltic LNG with $1.6bn Support from VEB