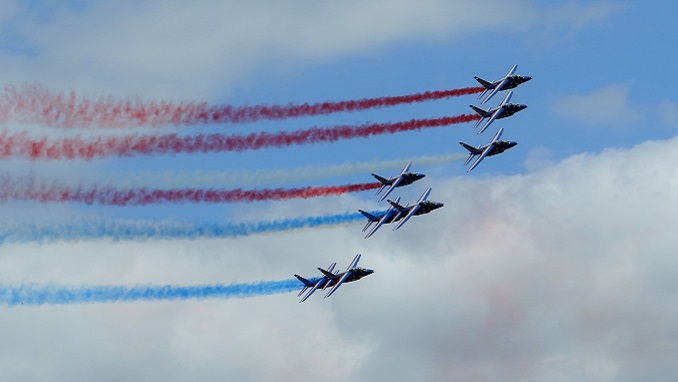 Russian officials are keeping busy at this year’s Paris Air Show, hoping to drum up both civilian and military orders, despite the noticeable absence of Russian aircraft from the event, AFP writes.

Only two Russian aircraft can be spotted among the dozens crowded on the tarmac at the Le Bourget airport just north of Paris — a hulking Beriev BE-200 amphibious fire-fighting jet, and two civilian Ansat helicopters, the news agency reports.

“What we haven’t had for several years now is combat planes,” said the air show’s chairman Patrick Daher, adding that “it’s not because of any blockage on our part.”

“It’s because of the sanctions. We would have liked to present our military planes,” said an official from state-run foreign arms sales company Rosoboronexport.

Russia has three private pavilions at the air show, including one for Rosoboronexport, where it reserves VIP treatment for potential clients including government delegations.

Moscow has been laboring under EU and American economic sanctions since 2014, when it annexed the Crimean peninsula during the civil war in Ukraine.

But despite the sanctions, Russia remains the world’s second-biggest arms exporters behind the United States.

“It’s a perfect place to meet all the partners from all over the world,” said Ilya Tarasenko, head of the MIG fighter jet firm, which has been folded into the state-owned United Aircraft Corporation.

But also missing is Russia’s flagship Sukhoi Superjet-100 (SSJ-100) passenger jet, its first new airliner of the post-Soviet era. Moscow has struggled to find international clients for the plane, a task further complicated after a Superjet crash-landed in the Russian capital last month, killing 41 people.

Some 30 countries fly MIG-29 jets, of which around 800 are still in service, and “we consider them potential customers for the MiG-35,” Tarasenko said, referring to his company’s newest offering.

It’s unlikely any orders will be unveiled this week, however, since MIG reserves its major announcements for Russia’s MAKS airshow in late August. And potential clients will have to consider the sanctions threat, since the U.S. has warned it will retaliate against any business or country that signs arms deals with Russian firms.