Sheremetyevo is on target for another record-breaking year after registering a 15.4% rise in passenger traffic in the first five months of 2019, Airport World reported.

The airport recently published its performance results for May and the first five months of 2019. A total of 18.7 million passengers passed through its facilities between January 1 and May 31, during which time the Russian gateway handled 155,120 aircraft movements – 15.8% up on the corresponding period a year ago.

The most popular international destinations from January to May were Paris, Antalya, Yerevan, Tel Aviv and Beijing while the top domestic destinations during the same period were St Petersburg, Sochi, Simferopol, Yekaterinburg and Krasnodar.

Its performance in May 2019 made Sheremetyevo the world leader in punctuality, according to the FlightStats ranking of world airports, Major Airports category, ensuring on-time departures for 92.6% of all flights.

International passenger numbers at Sheremetyevo increased by 13.4% to 9.8 million during the first five months of the year, while domestic traffic was up 17.7% to 8.9 million passengers. 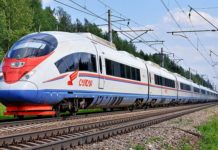