Ukrainian state oil company Ukrnafta has won a ruling in a Swiss arbitration tribunal which forces Russia to pay $44.5 million in compensation for expropriating the company’s property in Crimea, Lenta reported.

In the case initiated in 2015, the company successfully argued before the arbitral tribunal that in April 2014 Russia seized its administrative office in Crimea as well as 16 petrol stations.

The company’s legal counsel, Yehor Serov, said that “any assets used by the borrower, that is the Russian Federation, for commercial purposes” could be used for collecting the compensation.

Those include Russia-owned banks Prominvestbank, Sberbank Ukraine, and the now-insolvent Ukrainian branch of Russia’s VTB Bank. Construction company Everest Estate and 18 other co-claimants targeted the shares of these banks in Ukraine last year after receiving a similar arbitral award.

Ukrnafta is jointly owned by the state of Ukraine as a majority shareholder (50% +1 share) and the business entities connected to oligarch Ihor Kolomoisky.

In response to the ruling, a spokesperson with the Russian Justice Ministry said the country does not recognize the legality of the decision.

“The Russian Federation did not participate in the proceedings on that claim. It does not recognize the legality of the decision, primarily due to the fact that the arbitration lacks jurisdiction for considering this claim,” the spokesperson said. 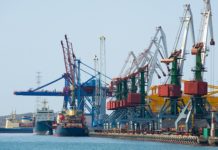 Britain Could Ease Some Restrictions on Russian Imports

Russia Could Produce Millions of Self-driving Cars by 2028: Report