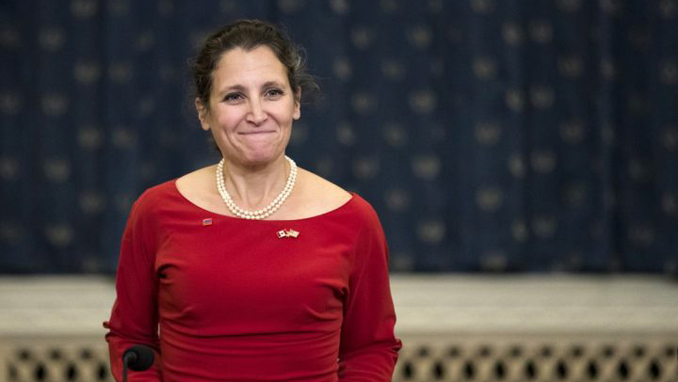 Canada on Thursday rejected an appeal from U.S. President Donald Trump to welcome Russia back in the G8 club of the world’s most developed economies, unless it withdraws from Ukraine, Foreign Minister Chrystia Freeland said Thursday, according to Reuters.

This week, U.S. President Donald Trump said he backs Russia’s return to the G8, calling Moscow’s membership in the club of world powers “much more appropriate.”

But first, she added, Russia must “show that they want to do that (by) leaving Crimea and ending the war in the Donbass” in Ukraine.

The G-7 is meeting this weekend in France. Russia had joined the group of wealthy democracies in 1997, but it was kicked out of the old G8 format after it invaded Ukraine and annexed the Crimea Peninsula in 2014. Russia’s President Putin has also been accused of orchestrating murders of opponents in Britain and elsewhere in Europe, as well as attempting to manipulate the 2016 U.S. election that saw Trump win a surprise victory.

Freeland reminisced that it was “entirely appropriate” to welcome Russia into the group back in the day.

“The G7 community of nations was extending a hand to a democratizing, reforming Russia,” she explained. “But then Russia grossly violated international law by invading and annexing Crimea and added to that with the continuing war in the Donbass. That’s why Russia was expelled.”

The G7 leaders of Britain, Canada, France, Germany, Italy, Japan and the United States are meeting in Biarritz, France on August 24-26.