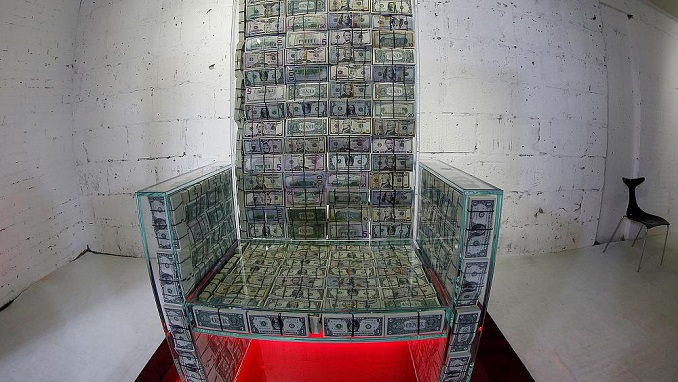 Visitors of Moscow’s Art Residence got the opportunity literally to sit on wads of cash last week during the presentation of the “X10 Money Throne” artwork, RBC reported.

The piece, which comprises one million dollars in cash sandwiched between 7cm (2.8 inches) layers of bulletproof glass in the shape of a throne, is the result of a collaboration between Russian pop artist Alexei Sergiyenko and Russian billionaire Igor Rybakov.

According to its creators, the aim of the half-ton artwork is to allow people to “feel the energy of money” and inspire them to earn more.

The “X10 Money Throne” will be on display to the public under tight security at the Russian capital’s Museum of Emotions from December 1.

Sergiyenko made a name for himself in 2012 with his series of pop-art paintings dedicated to Russian President Vladimir Putin.

Rybakov is co-owner of the Technonicol corporation and co-founder of the Rybakov Fund. In 2018, he featured in the Forbes list of the world’s richest people with an estimated wealth of $1.4 billion.

The 47-year-old construction magnate is known for his unorthodox stunts. In October, he stunned the visitors of a business conference by releasing a “rain shower” of cash worth $20,000 into the audience.

Rybakov told his audience he wanted to help young Russian entrepreneurs get started and be successful, before releasing the money from the stadium’s roof onto the crowd. The billionaire told the Synergy Global 2019 business forum how he began building his fortune when his father Vladimir, a Communist-era engineer, gave him just one dollar.

Big Cities in Russia a Century Away from Moscow’s Economic Development:...

Fitch: Russia Will Overtake China in Gold Production Within Decade