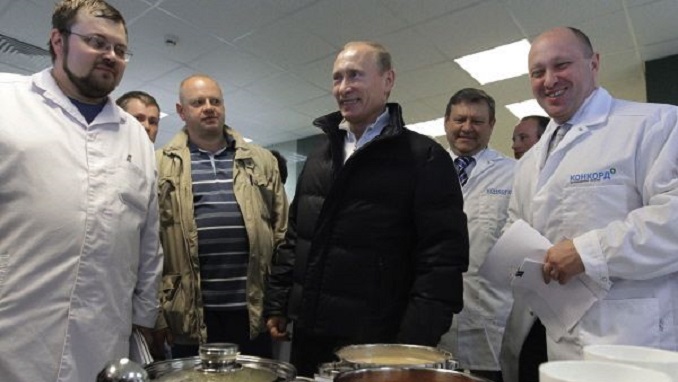 “Putin’s chef” charged with organizing “troll factory” to interfere in U.S. elections
A company called the Internet Research Agency (IRA) was charged by Special counsel Robert Mueller’s office with violating U.S. law and interfering in the 2016 election, along with 13 Russian nationals.

As Deputy Attorney General Rod Rosenstein said while announced the indictments, the defendants allegedly “conducted what they called ‘information warfare against the United States’ with the stated goal of spreading distrust towards the candidates and the political system in general.”

The IRA registered with the Russian government as a corporate entity in 2013. It was based out of an office in St. Petersburg, the second biggest city in Russia. Over the next few years, the IRA employed hundreds of people, Rosenstein said, and was primarily funded by Yevgeniy Prigozhin, a prominent Russian oligarch with close ties to the Kremlin, The New York Times reports.

In 2014, the IRA established an initiative called the “translator project,” the indictment said, which focused on provoking Americans on social media platforms, including YouTube, Facebook, Instagram, Twitter, and others. Rosenstein said more than 80 employees were assigned to the project during the heat of the U.S. campaign season in July 2016.

The IRA was part of a multi-faceted Russian operation called Project Lakhta. The project aimed to sow discord among Americans in the run-up to the 2016 U.S. presidential election.

Prigozhin is one of Russia’s richest and most politically connected people, with ties to the highest levels of the Kremlin, including Russian President Vladimir Putin.

Prigozhin is known in Russia for running numerous restaurants and catering businesses that have hosted Putin’s dinners with foreign diplomats. Last year, the AP reported that some in Russia media have nicknamed him “Putin chef.”

“The Americans are very impressionable people. They see what they want to see,” Prigozhin told Ria Novosti, a Russian state news agency, following the indictment’s release. “I have a lot of respect for them. I am not upset at all that I ended up on this list. If they want to see the devil, let them see him.”

Last year, the U.S. government placed Prigozhin on its sanctions list for his dealings with Russia’s Defense Ministry, which has been heavily involved in the conflicts in Ukraine and Syria.

Prigozhin was primarily responsible for bankrolling the IRA’s work through two companies he controlled: Concord Management and Consulting LLC, and Concord Catering.

Through those companies and various other affiliate groups, Prigozhin provided the IRA with a monthly budget of at least $1.25 million, according to the Justice Department indictments.

Both of Prigozhin’s Concord companies, which hold various contracts with the Russian government, were named in Mueller’s indictment.