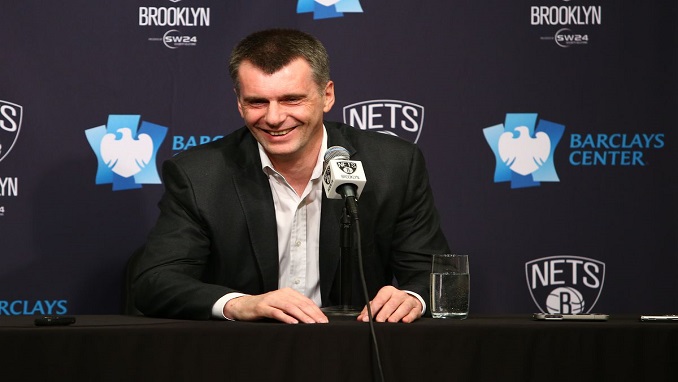 The business magnate said on Friday that the sale to Taiwanese-Canadian billionaire Joe Tsai will include full ownership of the 18,000-seat Barclays Center arena in Brooklyn, New York City.

In 2018, Prokhorov, who made the bulk of his money in the metals industry, sold a 49 percent stake in the basketball team for $1billion to Tsai, co-founder of China-based global Internet company Alibaba Group.

Tsai paid an additional $1.35 billion for the remaining 51 percent, valuing the team at $2.35 billion. According to AP, the inclusion of the Barclays arena will add about $1.05 billion to the deal.

“It has been an honor and a joy to open Barclays Center, bring the Nets to Brooklyn, and watch them grow strong roots in the community while cultivating global appeal,” Prokhorov said.

“The team is in a better place today than ever before and I know that Joe will build on that success while continuing to deliver the guest experience at Barclays Center that our fans, employees, and colleagues in the industry enjoy,” he added.

The purchase and full control of the franchise requires approval from the NBA’s Board of Governors. The Nets said the transaction is expected to be finalized in September.

The Russian oligarch bought the New Jersey-based team from Bruce Ratner in 2010 and moved it to Brooklyn and the Barclays Center in 2012.

Prokhorov is among the 200 businessmen included in the so-called Russian oligarch list submitted by the U.S. Treasury to Congress in 2018. The list exposes the businessmen to greater scrutiny, including banking transactions, as well as possible sanctions.

Prokhorov used to own a stake in Rusal, the world’s second-largest aluminum producer, with fellow tycoons Oleg Deripaska and Viktor Vekselberg. Prokhorov sold his remaining stake in Rusal to Vekselberg in February 2018 two months before the United States sanctioned Vekselberg and Deripaska in April 2018.

Prokhorov made his initial fortune when he acquired a stake in Russian metals giant Norilsk Nickel during the 1990s. He sold his stake in the company to Deripaska for cash and shares of Rusal in 2008.

anime to watch GoGoAnime One Piece