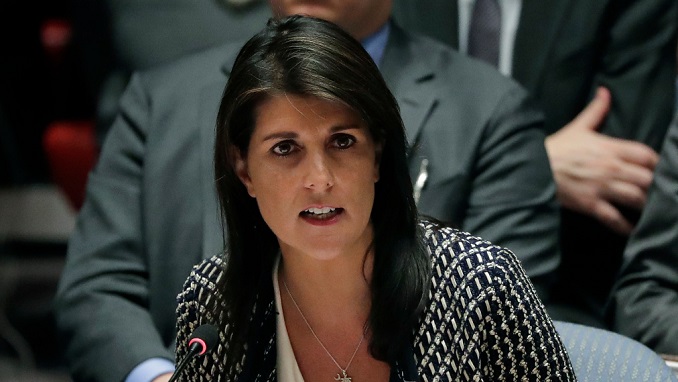 Tensions between the White House and Washington’s ambassador to the United Nations Nikki Haley spilled into public view on Tuesday as confusion reigned over the president’s plans for further sanctions against Russia, CNN reported.

“She got ahead of the curve,” National Economic Council Director Larry Kudlow told reporters on Tuesday near the President’s Florida estate, a day after a report claiming Trump “put the brakes” on plans for new Russia sanctions. “She’s done a great job, she’s a very effective ambassador. There might have been some momentary confusion about that.”

Haley struck back with a stunning statement later in the day that opened a new rift in the administration and raised questions about the White House’s explanation of her comments.

“With all due respect, I don’t get confused,” she said in a statement. A White House official said Kudlow apologized to Haley for saying that she might have been confused.

But he wasn’t alone in that sentiment. A day earlier, White House press secretary Sarah Sanders responded to reports about Haley’s comments by saying the administration was “considering additional sanctions on Russia,” but that a decision hadn’t yet been made.

Separately, two senior administration officials told CNN Tuesday that the President had not signed off on the new sanctions by the time Haley made her comments on two news programs Sunday and said Haley must have walked away from a Friday White House meeting about the sanctions having misunderstood how firm the plans were.

Haley’s statement Tuesday evening suggested she was in sync with the administration’s plans during her Sunday show appearances.

The opposing statements underscored the chasm between Trump and members of his foreign policy team just days after the U.S. joined with the UK and France to launch coordinated airstrikes against Bashar al-Assad’s regime in Syria. Haley, a vocal critic of Russia, excoriated Moscow’s role in propping up Assad at an emergency meeting of the UN National Security Council.