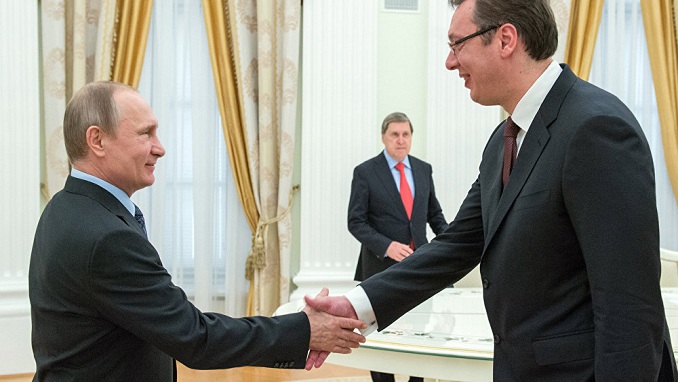 Serbian President Aleksandar Vucic said that at the talks in Washington he refused to buy “expensive gas instead of cheap”, TASS reported.

“It (the signed document – TASS) says that we must diversify sources of energy supply. It had the continuation we successfully fought to throw it away. They wanted us to make commitments regarding what we buy and who we buy from. We did not agree to this. In any case we must engage in diversification, but as for someone telling us that we should buy expensive gas instead of cheap [Russian] gas – we could not agree to this,” Vucic told reporters on Friday. His speech was broadcast at the TV Pink channel.

The Serbian President explained that the agreement still has a clause, which implies a generalized diversification of energy resources. “Thus, this is a generalized norm, which does not pose a problem for us, and we will do it. It is not only about gas, but also concerns other sources of energy,” Vucic said.

Earlier, Vucic said that Serbia’s revenues from the transit of Russian gas through the Serbian section of the TurkStream gas pipeline would amount to $185 mln annually. According to him, TurkStream is of great importance for the industrialization of Serbia and attracting investors. He noted that Serbia will receive mainly Russian gas through the gas pipeline: 13 billion cubic meters of gas will be supplied to Serbia, 3 billion cubic meters of this volume will remain in Serbia, the rest will go to Hungary, Bosnia and Herzegovina, Kosovo and Metohija.

Earlier in December 2019, Serbijagas CEO Dusan Bajatovic announced that Serbia had fully completed pipe-laying on its section of the TurkStream gas pipeline.

The Turkish Stream pipeline was launched on January 8, 2020. It runs along the bottom of the Black Sea from Russia to the coast of Turkey. From Turkey there is a land transit line stretching to the border with neighboring countries from where gas is already exported to Greece, Bulgaria, and North Macedonia. In the future (after the completion of the construction of the entire infrastructure), gas will go to Serbia and Hungary. The throughput capacity of the 930 km gas pipeline is 31.5 billion cubic meters of gas per year.

Russia-China Nuclear Deal Is Another Blow to American Influence: Expert