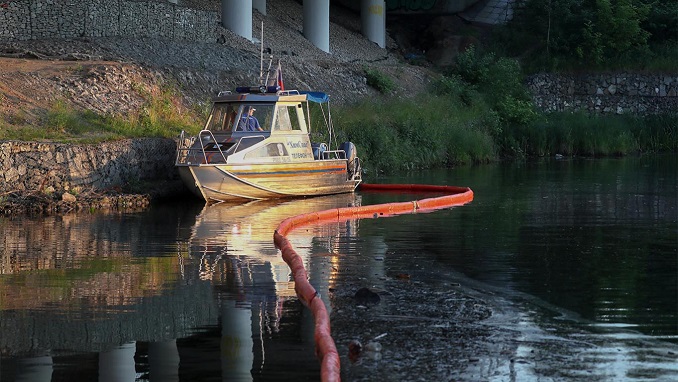 An oil spill north of Moscow has caused a 1,000-fold increase in pollution levels at a reservoir that supplies water to Russia’s capital, the Federal Water Resources Agency said Monday.

The agency, Rosvodoresursy, said it first discovered petroleum products on June 25 in a river that flows into the Khimki Reservoir 15 kilometers northwest of Moscow. It said it believes a storm drain run by a municipal company may be the source of the spill, The Moscow Times reported.

Rosvodoresursy said fish and birds have died from lack of oxygen as a result of the spill.

The oil slick at Butakovsky Bay in the Khimki Reservoir has increased in size from 900 square meters to 22,900 square meters since being first discovered Thursday. Rosvodoresursy said it has installed booms stretching 400 meters as part of an interagency cleanup effort.

“Enforcing the court decision would have prevented or minimized the contamination of Moscow’s drinking water reservoir,” Astakhov said in the Federal Water Resources Agency’s statement. “Now, our experts are working around the clock to remove the oil spill and rehabilitate the area.”

“In the future, Rosvodoresursy will consider seeking compensation for damage and the funds spent on the clean-up from the identified culprit of the water pollution,” the agency said.

News of the Butakovsky Bay spill comes a month after 21,000 metric tons of diesel fuel spilled into the waterways and soil near the city of Norilsk 3,000 kilometers northeast of Moscow.

Novak: Oil Price Could Have Dropped to $25 If There Was...