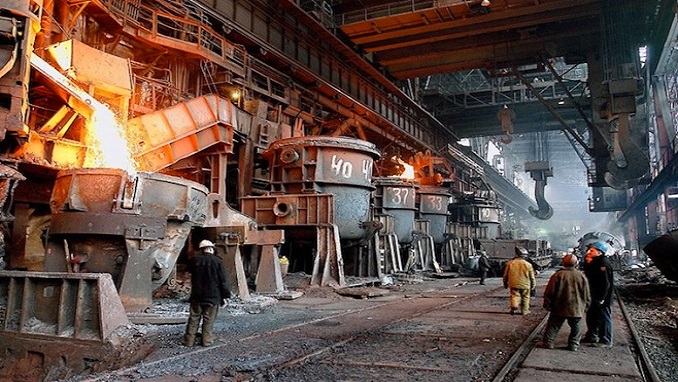 The improvement mainly reflected higher steel product prices, lower expenses in U.S. dollar terms as costs benefited from a weakening of the Russian rouble, as well as the impact of cost-cutting initiatives on efficiency. This was partly offset by an increase in prices for raw materials, including scrap, electrodes and ferroalloys.

Operating profits more than doubled to $1.7 billion mostly due to higher revenue and a $147m gain from currency swings, as cash costs of steel and raw materials increased in Russia. Profit before tax soared to $1.5 billion from $294 million and earnings per share to $0.77 from $0.04.

Free cash flow surged to $661m and, after Evraz paid out dividends of around $617m to shareholders during the first half, a second interim dividend was declared on Thursday of $0.40 per share, or $577.3m in total, which the board said reflected its confidence in the group’s financial position and outlook.

Some 62.74% of these dividends will make their way to a trio of owners, led by Chelsea FC owner Abramovich, who owns a 30.5% stake via the Cyrpus listed Lanebrook vehicle that includes a 21% stake for company chairman Alexander Abramov and 10.5% for chief executive Alexander Frolov. Abramov, who set up a metals exporting business that was precursor to Evraz in 1992, just after the dissolution of the USSR, and Frolov sold a 40% stake in Evraz to Abramovich in 2006 for more than $3 billion.

In the second half of 2018, Evraz anticipates that market prices could decline, particularly international coal and steel benchmarks. Management’s confidence in the overall financial performance remaining “solid” comes from a pipeline of internal improvements and a pricing environment that is still seen as being generally strong relative to the average levels seen in the last three years.

Tensions Grow Between U.S., India over S-400 Deal with Russia