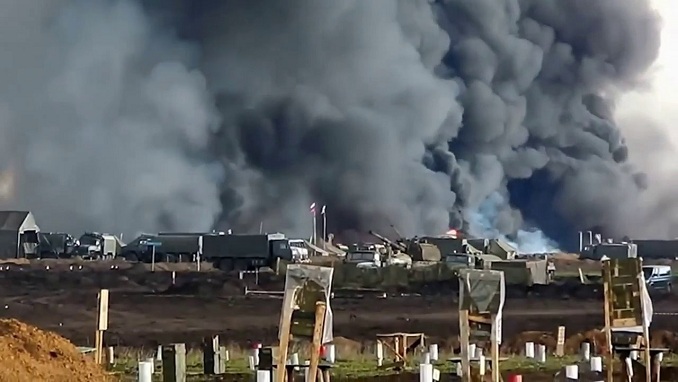 A fire that broke out on Thursday at a weapons testing range in northern Russia killed two people, briefly raised radiation levels and prompted the authorities to prohibit shipping and sailing in parts of the White Sea for a month, according to officials and news media reports, The New York Times reported.

According to the Times, Russia’s military said that the fire occurred when a liquid-fueled rocket engine exploded at the testing site, but that radiation levels remained at normal background levels, contradicting reports from the municipal authorities in nearby Severodvinsk. It was the second lethal accident involving the Russian Navy in just over a month.

There was no immediate explanation for the discrepancy in the statements from the military and the authorities in Severodvinsk — a major manufacturing and testing center for Russia’s nuclear submarine fleet, and the closest major population center to the reported accident site. A researcher with the Norwegian-based environmental group Bellona, Andrei Zolotkov, told the Interfax news agency the radiation level was probably not harmful, but raised worrying questions.

If the radioactive spike was caused by the fire at the site, he said, “it follows that this fire in some way touched radioactive substances,” which entered the atmosphere. “It’s worth paying attention to.”

Interfax reported that the fire had broken out near the town of Nenoksa, about 25 miles west of Severodvinsk; Russian news outlets have reported that a naval weapons test range is nearby.