Four people were killed and three more wounded as a result of shooting on a passenger bus in the town of Bor in the Nizhny Novgorod Region, a source in the law enforcement told TASS.

“At present it is known that there were seven people affected as a result of the shooting – four of them killed and three others wounded,” the agency’s interlocutor said.

Earlier the source reported that three people were killed and several wounded. The shooter hasn’t been detained yet. The police confirmed the fact of fire opened on a bus and a bus stop in the Nizhny Novgorod Region and said the search for the suspect is underway. 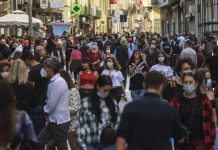 K-9 Hybrids to Sniff Out COVID-19 at Moscow Airports

Over 15,000 Cases of COVID-19 Infection Detected in Russia, Highest During Pandemic

Russia and Saudi Arabia Are Not at War Over Oil Prices:...