Russian Industry and Trade Minister Denis Manturov has said the development of industry in Russia and China and their cooperation in the sphere draws dissatisfaction from Western countries.

Manturov was speaking to reporters in the southwestern Chinese city of Kunming on Friday, according to RIA news agency.

“You can see for yourself the difficult geopolitical and economic situation in which our countries are. It is chiefly due to the fact that we produce large volumes of competitive products – it concerns iron and steel industry and nonferrous industry, in particular, aluminum,” Manturov said at a press conference on the results of a meeting of the Russian-Chinese sub-commission on industrial cooperation.

“The stronger the Chinese and Russian industries become, the more dissatisfaction it draws from our Western colleagues, in particular, the United States,” the minister noted.

“However, it only motivates us all the more to cooperate in the areas we discussed today. These are, in particular, metallurgy industry, aluminum, radio-electronic industry, pharmaceutics, automobile industry, and new ground-breaking spheres,” Manturov reported.

“Pressure, sanctions and certain bans by the Western countries and the U.S. push us once again toward cooperation and a search for joint solutions and products,” the Russian industry and trade minister concluded.

Despite the slowdown, the numbers exceeded the expectations with Reuters analyst consensus expecting 2.5% growth in August. In January-August overall Russia’s industry expanded by 3.1%.

Slight industrial output growth deterioration in the reporting month is in line with the August manufacturing PMI reading, which was slightly up m/m to 48.9 from 48.1 in July, but still in the negative territory below the 50 no-change mark. 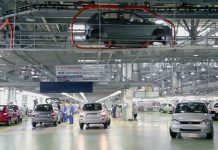