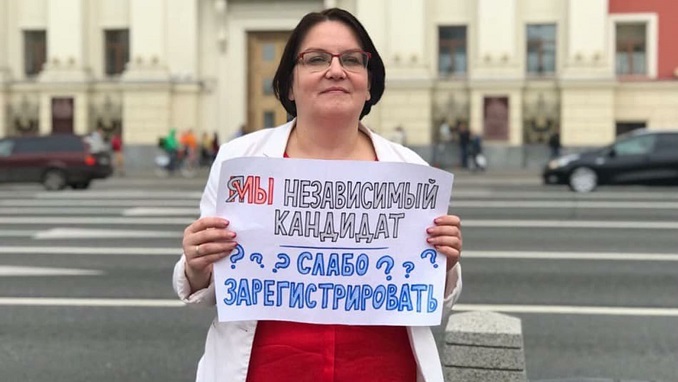 Yulia Galyamina, a Moscow city councilor and critic of the Kremlin, was given a a two-year suspended jail term on Wednesday after being found guilty of repeatedly violating rules for organizing opposition protests, Reuters reports.

Galyamina, who took part in an opposition campaign against constitutional reforms this year that could allow President Vladimir Putin to remain in power until 2036, had dismissed the charge as politically motivated.

Russian authorities opened the case against Galyamina in July, accusing her of having “repeatedly violated” the rules for organizing and staging protests.

Galyamina, who was greeted by cheers and claps from her supporters outside the courthouse, tweeted that she would appeal against her conviction and sentence. The prosecution had asked the court to jail her for three years.

Although she avoided prison time, the conviction bars her from running for office in next year’s parliamentary election and also means she loses her city councilor status, according to Dmitry Gudkov, an opposition politician.

“It is a relief Galyamina will not serve prison time, but that does not make her prosecution any less a disgrace and violation of Russia’s international legal obligations,” Human Rights Watch said in a report.

“It is also yet another example of the price opposition politicians, critics and civic activists have to pay for peacefully expressing their views. People should not be penalized for peaceful protest,” New York-based HRW said.

Galyamina, 47, was involved in a campaign that planned a protest against constitutional reforms on July 15 in Moscow. Police detained dozens of people at the rally.

Adopted in July, the reforms allow Putin to seek two more six-year terms as president instead of stepping down in 2024 and, if re-elected, to stay in power until 2036. Other changes grant former presidents immunity from prosecution.

Amnesty International has said the charges against Galyamina were a travesty and amounted to “using the justice system to criminalize peaceful protests.”