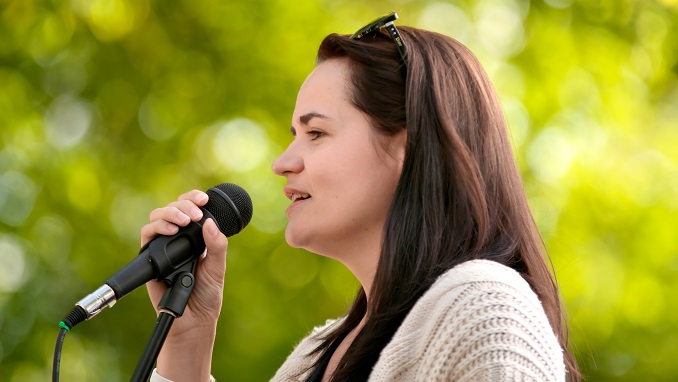 Svetlana Tikhanovskaya, who maintains she was the true winner of an Aug. 9 election, issued what she said was a “people’s ultimatum,” demanding Lukashenko quit power by Oct. 25 and halt the “state terror” unleashed by authorities against peaceful protesters.

“If our demands are not met by Oct. 25, the whole country will peacefully take to the streets,” she said in a statement released in Lithuania, where she is currently based in exile after leaving Belarus following the election.

“And on Oct. 26 a nationwide strike will begin at all enterprises, all roads will be blocked, and sales at state stores will collapse,” she said. “You have 13 days.”

Unprecedented protests broke out after Lukashenko claimed victory in August elections over Tikhanovskaya, a 38-year-old political novice whose husband Sergei Tikhanovsky was planning to challenge Lukashenko in the elections but was then himself jailed.

Over the past weeks riot police detained thousands of demonstrators who have reported torture and abuse in custody, prompting international condemnation and Western sanctions. Several people have died in the crackdown.

On Monday, the ex-Soviet country’s interior ministry threatened to fire on protesters, marking a major escalation in the two-month standoff between Lukashenko and demonstrators.

Tikhanovskaya said on Tuesday it was time for Belarusians to take a side after the authorities unleashed “state terror.”

“Everyone who has not yet made the decision to switch to the side of the people is an accessory to terror. Declare publicly that you no longer support the regime.”

The statement also represents a change of tone for Tikhanovskaya, who has quickly won the support of western leaders including French President Emmanuel Macron and German Chancellor Angela Merkel.

At the weekend Belarus authorities allowed Tikhanovskaya to speak to her jailed husband, who advised his wife she should get “tougher” on the authorities.

All key Lukashenko critics have been either jailed or pushed out of the country, including Tikhanovskaya who was granted refuge by EU member Lithuania.

Separately, worker Sergei Dylevsky, the last member of the opposition’s Coordination Council still in Belarus, has left the country and was now in Warsaw, the group said.

Allies of Tikhanovskaya have formed the Coordination Council to oversee efforts for a peaceful transition of power from Lukashenko.

Its members include Nobel Prize-winning author and outspoken Lukashenko critic Svetlana Alexievich who has left Belarus for treatment in Germany.

Bank of Russia Expected to Lower Interest Rate This Week

Major New Russian Shipyard to Be Constructed by 2020: Official