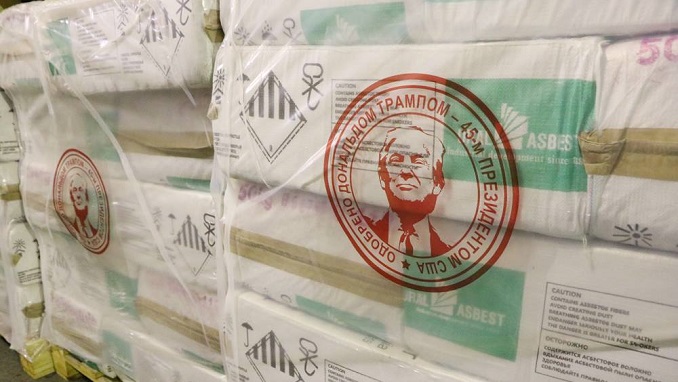 One of the world’s largest producers and sellers of asbestos has reportedly begun placing a seal with President Trump’s face on its products, The Guardian reported on Wednesday.

Uralasbest has adorned pallets of its products with Trump’s face and the message, “Approved by Donald Trump, 45th president of the United States.”

The newspaper noted that the move came after the Environmental Protection Agency (EPA) elected not to prohibit the new asbestos product outright.

“Donald is on our side!” Uralasbest announced in a Facebook post last month accompanied by the products with Trump’s face stamped atop them. The post also thanks Trump for supporting former EPA chief Scott Pruitt and adds that Trump called asbestos “100% safe after application.”

A once popular material across the world, asbestos has been banned or its use restricted in most Western countries in recent decades due to health hazards. It still remains in widespread use in many countries today and is not banned in the U.S.