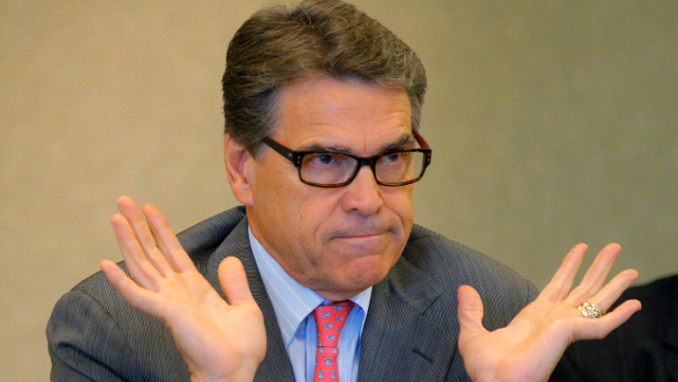 The U.S. should be flexible in negotiations with Saudi Arabia about providing nuclear reactors because two adversaries are also competing for the role, Energy Secretary Rick Perry told lawmakers Thursday.

Russia and China are interested in partnering with Saudi Arabia as it tries to develop civil nuclear energy to shift away from oil, and neither country is likely to restrict the Saudis from using the technology to make nuclear weapons, Perry testified before the Senate Armed Services Committee.

“I like to remind people that our choices at this particular point in time, it appears to me, either Russia or China is going to be a partner in building civil nuclear capability in the Kingdom of Saudi Arabia or the United States,” he said, according to The Hill. “I think it’s important for us to negotiate in a really good and a powerful way, but recognizing that the alternative of who they’re going to be doing business with is of great concern to me.”

Eager to extend a lifeline to U.S. companies hurt by a domestic downturn in nuclear power plant construction, the Trump administration is in negotiations with the Saudi government as it seeks to build as many as 16 new reactors in the kingdom. Saudi Crown Prince Mohammed bin Salman was in D.C. this week and discussed the potential deal with President Trump.

Democrats on Capitol Hill are concerned that Perry and the Trump administration might try to exempt the Saudis from Section 123 of the U.S. Atomic Energy Act, which bars countries that receive American nuclear technology from using it to enrich uranium for weapons.

Under questioning, Perry said the U.S. negotiations should be aimed at “having those additional protocols and the International Atomic Energy Agency with their ability to go in and make sure they are in fact not involved in any activities untoward.”

In December, Russia and Saudi Arabia have signed a roadmap for cooperation in the atomic energy sector, which comprises a number of steps needed to implement a cooperation program that was signed by the two nations during Saudi King Salman’s visit to Russia in October. A deal to work together on two nuclear reactors was signed in February.

Yandex Poised for More Growth after Revenue Jumps 37% in 2019