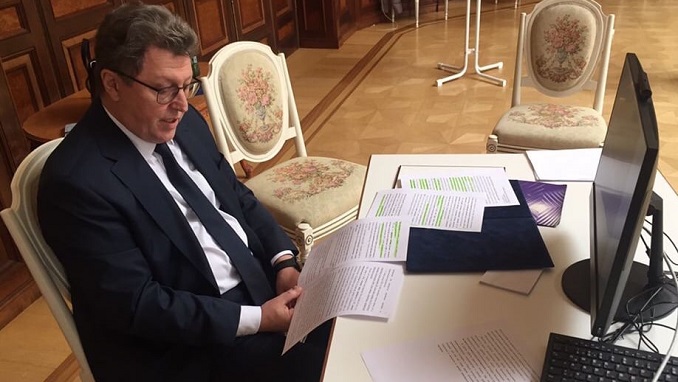 The current situation around the Open Skies Treaty indicates its soonest collapse and Russia will be ready to endorse its denunciation within days, Konstantin Gavrilov, head of Russia’s delegation the Vienna talks on military security and arms control, said on Monday.

“So far, the situation is developing towards the treaty’s collapse. No unilateral concessions should be expected from Russia. If the status quo stays in place, our domestic procedures preceding notification about our decision to withdraw from the treaty will be completed by late May,” he 85th session of the Open Skies Consultative Commission in Vienna.

“It will take several days for the Russian government to submit a bill on the treaty’s denunciation to the president, which will later be considered by both houses of the Russian parliament,” he added.

According to the diplomat, the Russian side sees that a number of US-leaning nations are seeking to blame Russia for the “deplorable situation around the Open Skies Treaty.” “It looks like the United States has never withdrawn from the treaty, with continuing claims that Russia ‘must correct its violations of the treaty’ before someone somewhere may probably begin to think about its possible return to the treaty,” he said.

According to Gavrilov, Moscow is ready to discuss concerns of its partners in a small group format on the sidelines of the Consultative Commission meeting but “practical discussion will be possible only after the United States says clearly and unequivocally that it wants to be back in the treaty.”

Russian Foreign Minister Sergey Lavrov said on April 8 that Moscow expected Washington to clarify its position on the treaty and stressed that Russia had not received a US note stating that Washington’s return to the Treaty on Open Skies could send the wrong signal to Moscow.

The Defense News weekly reported earlier that the US administration had sent a diplomatic note to its international partners in late March, saying that Washington’s consent to return to the agreement Moscow continued to violate, as it claimed, would send a wrong signal to Russia and undermine Washington’s position. The U.S. Department of State said in response to a request from TASS to comment on that report that the final decision had not been made yet.

The Russian foreign ministry released a statement in mid-January informing that Russia was beginning domestic procedures to withdraw from the Open Skies Treaty “over the lack of progress in what concerns the removal of obstacles for its continuation in the new conditions.”

For years, Washington had been accusing Moscow of exercising a selective approach to the implementation of the Open Skies Treaty and violating a number of its provisions. Russia had been laying counter claims. In 2017, Washington imposed a number of restrictions on Russia’s observation flights over the U.S. territory. Moscow gave a tit-for-tat response. In November 2020, the United States withdrew from the treaty.

The Treaty on Open Skies was signed in March 1992 in Helsinki by 27 member nations of the Organization for Security and Cooperation in Europe (OSCE), known as Conference on Security and Cooperation in Europe (CSCE) before 1995. The main purposes of the open skies regime are to develop transparency, render assistance in monitoring compliance with the existing or future arms control agreements, broaden possibilities for preventing crises and managing crisis situations. The treaty establishes a program of unarmed aerial surveillance flights over the entire territory of its participants. The treaty came into effect from January 1, 2002 after being ratified by 20 countries. Russia ratified the Treaty on Open Skies on May 26, 2001.

Bitcoin Price Down after Rising Sharply by Over 10%