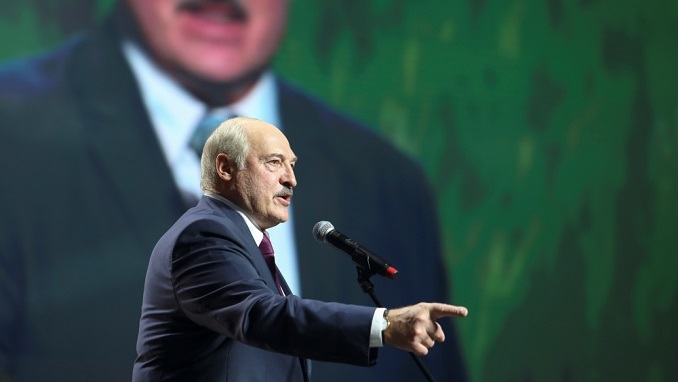 Four German lawyers have filed a criminal complaint against Belarusian president Alexander Lukashenko, with the German Prosecutor General’s Office accusing him of crimes against humanity over his crackdown on protests, RT reported.

The lawsuit was filed on behalf of 10 Belarusians, some of whom fled to Germany because of alleged persecution at home. “Our clients expect Germany to defend universal human rights in the case of Belarus as well,” Benedikt Lux, one of the four lawyers and a regional MP in Berlin, said in a tweet.

The lawyers demanded “justice” as well as “an independent investigation and prosecution” for what they describe as “crimes against humanity” committed by the Belarusian leader and his security forces. The lawsuit has reportedly been filed against Lukashenko and some of his officials, however no person other than the president has been identified by name so far.

A spokeswoman for the German Prosecutor General’s Office in Karlsruhe confirmed to local media on Wednesday that a complaint accusing the Belarusian authorities of “crimes against humanity” had indeed been filed, but provided no further comments on the case.

The lawyers had collected “100 documented cases of state-organized torture,” Lux said in another tweet on the legal action, adding that the abuse alleged in the lawsuit involved “arbitrary arrests, sleep and food deprivation” as well as beatings and “various humiliations.”

“Overall, the state treatment can only be described as bestial,” another lawyer, Onur Ozata, told German media. Ozata added that all of the legal team’s clients under the suit “suffer from serious health consequences” after going through “ill-treatment during the days of their detention.”

The lawyers now expect German authorities to prosecute the Belarusian officials “in accordance with the principle of universal law” that allows nations to claim criminal jurisdiction over an accused person regardless of their nationality, country of residence, or the place where the alleged crime was committed.

Last year, Belarus saw a wave of massive protests in its capital Minsk and other cities, sparked by disputed presidential election results. Lukashenko was re-elected for his sixth consecutive term in a vote that the opposition claimed was rigged.

Lukashenko’s competitor, opposition figurehead Svetlana Tikhanovskaya, fled Belarus days after the election and amid protests. She currently resides in Lithuania and has been shown steady support from European governments and Washington.

Minsk reacted to the wave of protest by launching a heavy-handed crackdown, involving numerous arrests as well as clashes between protesters and police. Lukashenko also accused his opponents of an attempt to topple him with the backing of the Western powers.

Russian Banks Rake in Great Profits in First Half of 2019